Review of "Happy Death Day 2U” by The Headless Critic 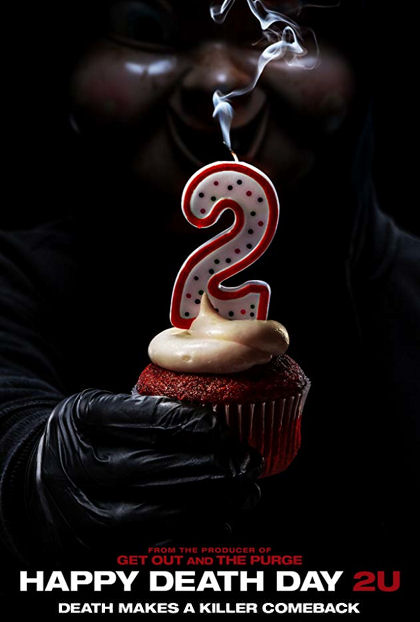 Having escaped the confines of re-living the day she died over and over again on her birthday, sorority sister Tree Gelbman (Jessica Rothe) has finally survived to awake a new day. Just one day removed from her death day, it’s time to die again. Thrown back through time, Tree is once again forced to relive the day she died, only this time it’s in an alternate dimension where not everything happens like it did before. “Same day, new killer.”

“Death makes a killer comeback.” In an attempt to capitalize off of 2017’s successful Friday the 13th horror hit Happy Death Day, director and now writer Christopher Landon goes multi-verse churning out another death day. Not a biggest fan of the original movie which I found more annoying in their lack of timeline continuity than I found entertaining with their painful characters, Happy Death Day 2U gets over complicated to give us more of the same.

It starts by passing it on from Tree Gelbman to the unlikely character of Ryan Phan (Phi Vu). You’d think they’d have gone with the boyfriend Carter Davis (Israel Broussard). Not to stray too far away from a successful formula it doesn’t stay focused on Phi Vu for very long, passing the day back to thirty-plus year old Jessica Rothe, still playing a 20-something college student, by creating an over-complicated time travel, multi-verse explanation for the events that’s caused everyone to be trapped in a time loop. I’d rather have had something a little more fresh with the side Asian best friend character.

The best part of the original movie is the Groundhog Day reference in the ending. For the sequel all of that is thrown out the window. While the original did one thing I love by never explaining why a girl who died has to relive the day of her death over and over, the sequel does what sequels do providing us with an extensive amount of unneeded backstory. Adding another unwanted layer, a movie that already has us reliving the same day adds alternate dimensions with mind-numbing simplicity and time travel via a Hoberman’s sphere college science project.

One of my biggest complaints about the original is the missed opportunity to show multiple kill scenes of the same girl. The sequel didn’t learn, deducing the majority of her deaths to an 80’s montage of learning and dying. In fact, her deaths and a killer being on the loose are almost an afterthought to everything else going on in the movie. It often feels like an 80's comedy than it does anything horror.