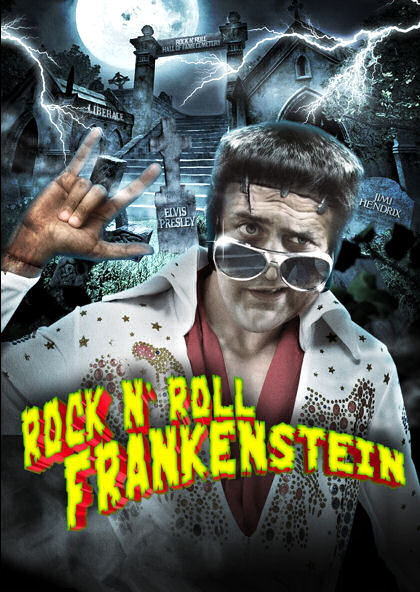 There’s an old saying that lawyers are greedy enough to steal the pennies off a dead man’s eyes. The only thing sleazier than a lawyer is a Hollywood agent. Music agent Bernie Stein (Barry Geterman) just lost his last act. Instead of leaving things in the hands of the next musician who might leave him, he decides to build his own. Worse than stealing pennies, he’s stealing legendary rockers body parts to build his own Franken-rocker. Using his brilliant nephew Frankie Stein’s (Jasyon Spence) ability to piece the deceased back together they use Elvis’ head, Jimi Hendrix’s hands, Liberace’s penis? When a bumbling roadie steals the wrong rocker’s junk, Franken-Rocker, The King (Graig Guggenheim) comes out just a little confused. With a brain that desires women and a penis craving hairy guy butt, King becomes a real monster.

With great new hits like “Boner Blues”, Rock ‘n’ Roll Frankenstein is a mix of mad music and sexually confused murders. Originally released to no acclaim in 1999, this low budget horror comedy finally got a VHS release three years later but didn’t receive their DVD release for a decade. Everything about this movie is a rough cut. It’s like the Rocky Horror Picture Show but instead of making a sex slave and supporting equality, they’re making a musical slave and promoting homophobia.

It’s technically a better made film with a more concise story than the legendary film that’s been consistently played in theaters across the country for the last forty years, it just doesn’t carry the message. It’s lewd, crude, offensive but actually funny. It’s a throwback film to a movie that is now lost, with one good performance from Jayson Spence, all directed by pornographer Brian O’Hara. The exploitation in this film is real, but if you aren’t easily offended, you have a sense of humor, you’re not an uber Elvis fan and you don’t mind low budget 90’s quality film, it stands out just a prominent but without the message of other music based films that once built a man.