Review of "Devil’s Path” by The Headless Critic 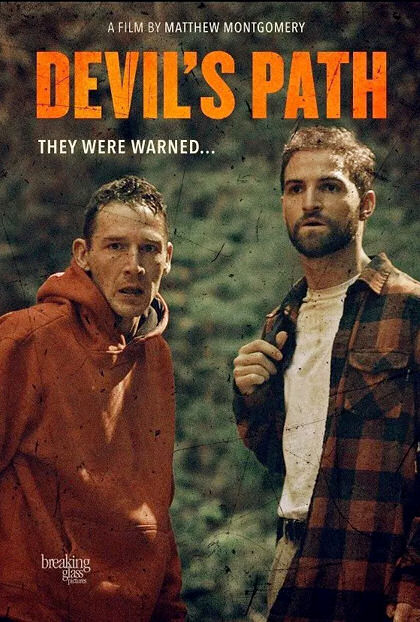 In the hiking trails where gay men meet for physical connection, people are going missing including Noah’s (Stephen Twardokus) brother. At first he set out to find what happened to his lost sibling but what he finds is an attractive stranger Patrick (JD Scalzo). What at first seems like an intimate connection soon develops into a fight for survival. When Noah is attacked, he and his new companion go on the run through the woods. Lost and scared, the truth of why they’re really there begins to reveal itself proving far scarier than anything chasing them.

Everything seems so peaceful in the serenity of the woods but there are Missing Persons posters all over the place… Set in the 1990’s where gay men apparently turned to the trees to fulfill their needs, “people don’t come here for love or romance, they come here to get off.” A forest full of men share these woods with a murderer who’s killing them. This dark, damp thriller is from first time feature director Matthew Montgomery.

Picturesque views of the wooded setting are filmed well. An overall grasp of the story being told does get muddled in the setting which is unfamiliar to most of us. Performances are what make this low budget, independent film, headed primarily by a cast of two in Stephen Twardokus and JD Scalzo. Subtle descent and subtle seduction carry us from what appears to be a hesitant homosexual encounter to murder. The horror in this thriller is realistic. Its low budget cinema done right, told through story and performance.