Review of "Greta” by The Headless Critic 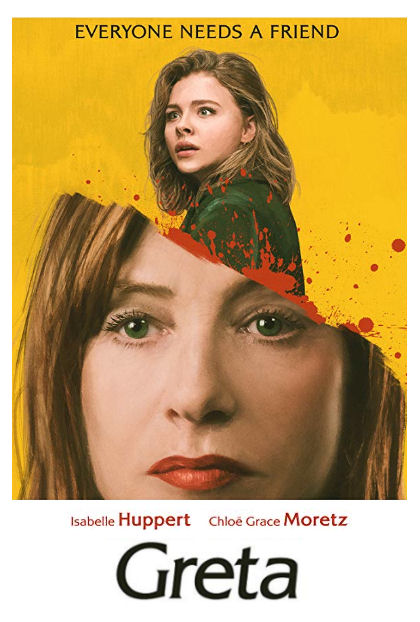 “Who is Greta?” A small town minded girl living in New York City finds a purse on the subway. “Don’t take the bait.” Her roommate Erica (Maika Monroe) tells her everyone in New York would take the money and get an asparagus colon detox. Frances (Chloë Grace Mortez) doesn’t want vegetables shoved up her butt. With the morals of a saint, Frances returns the purse to the elderly woman on the I.D. inside. “Her game has just begun.”

With a knock at her door from a young girl returning her lost purse, retired piano teacher Greta (Isabelle Huppert) has made a new friend. “Everyone needs a friend.” With Frances never having a mother and Greta having lost a daughter, the two form an unlikely friendship that defies their age difference. Two lonely people randomly find each other in a city of millions only to discover their chance meeting wasn’t so random at all. Frances finds all of the purses, all of them the same, all of them Greta’s plants. What she thought was a friendship is something completely different. You don’t obsess over friends and this obsession proves deadly.

The latest concept from horror film writer Ray Wright explores the dangers of teaching the elderly to text. There’s a reason older people get forgotten by youth, friendships with them can be dangerous. They aren’t as feeble as they look and they’re far more deadly. What appears from the trailer to be a mystery drama is actually a horror thriller. It starts as friendship that never seems right with a thriller build. It ends psychotic with true horror, blood and murder.

I’ve always enjoyed the raspy-voiced child actress turned adult Chloë Grace Mortez. Her performances are always fine, even pulling off a best case scenario version of Stephen King’s Carrie in a role she couldn’t have been more miscast for. She has screen presence but her beauty doesn’t outdo her ability to be a girl next door and a familiar family face we’ve watched grow up on screen. French actress Isabelle Huppert shows her talent and experience in a character with a wider range exploring emotional stability. Maika Monroe impresses most of all in a smaller role showing she could easily be the star.

Irish director Neil Jordan produces a good film with slightly misdirected marketing. What’s made to look like a mystery is more about having a stalker. Greta puts a shining light on experienced French actress Isabelle Huppert but it doesn’t dig deep enough into friendship or obsession to transcend into anything deeper than a horror movie. Some viewers will find it slow paced in the beginning while others will see this time wasted on a superficial connection that means less when it’s broken. The horror is there, it’s a flash and you have to wait for it but it's definitely a Single White Female movie worth checking out.