Review of "Bullitt County” by The Headless Critic 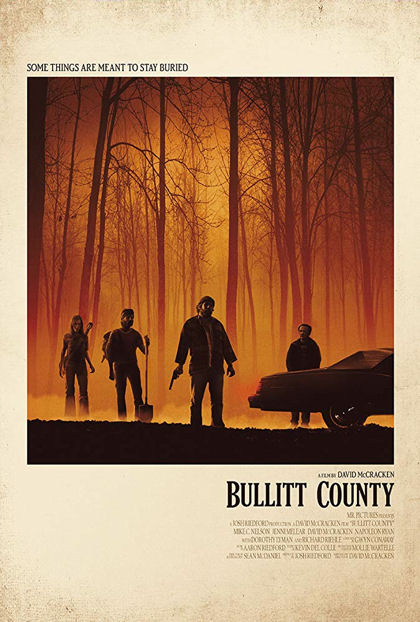 To some people bourbon is a premier alcoholic beverage, in Kentucky it was a county first. “Way back during prohibition times, the government was hammering down on all the distilleries and the Bullitt family of Bullitt County had one of the biggest, ergo a target on their back. So the legend goes they took all their money out in the Bullitt County wilderness and buried it, supposedly millions.” Rumor goes when out-of-towners go looking for the buried treasure, they go missing, descendants of the Bullitt family out in the hills protecting it. “A bunch of hillbillies protecting buried treasure in the woods.”

When they were younger hothead Gordie (Mike C. Nelson) was perhaps the wildest of them all. Ten years later on the verge of getting married, his friends Robin (Jenni Melear), Wayne (Napoleon Ryan) and Keaton (David McCracken) chloroform and kidnap him to relive one of the best weekends they ever had on the bourbon trail in Kentucky. Starting with their favorite bourbon distillery in Bullitt County they set out on an adventure of rediscovery.

With his sobriety chip in his pocket, Gordie soon finds out about the local legend of buried bourbon money in the hills of Bourbon County. He detours their trail on the hunt for millions. “Kentuckians, every buck-toothed, country bumpkin one of us, are at least smart enough to not dig up what aren’t ours.” “Some things are meant to stay buried.”

Kentuckiana raised writer, director and co-star David McCracken, takes us on a trip in the 1960’s and 70’s that starts on the bourbon trails in Kentucky’s Bullitt County but soon detours into murder. As a critic out of Kentucky, I’ve taken friends from out of town on the bourbon trail. As one friend said, “Only in Kentucky can you tour a bourbon distillery with tasting samples at the end then they send you off to drunken drive to the next distillery.” We do things a little bit different here in the hills of Kentucky as the outsiders in Bullitt County find out. With his second feature David McCracken makes an alluring indie film about the reuniting of friends that’s story based with excellent performances and equally good writing. Carolyn's dialogue, some quoted in this review, and how actress Alysia Livingston delivers it comes to mind as I write these words. Then enter the hillbillies, The Mr. (Richard Riehle) and The Mrs. (Dorothy Lyman). The friendship built in the first act is unraveled just as easily as the unraveling of ones sanity. Money can make you do some awful things; love can make you do even worse.