Review of "The Cannibal Club” by The Headless Critic 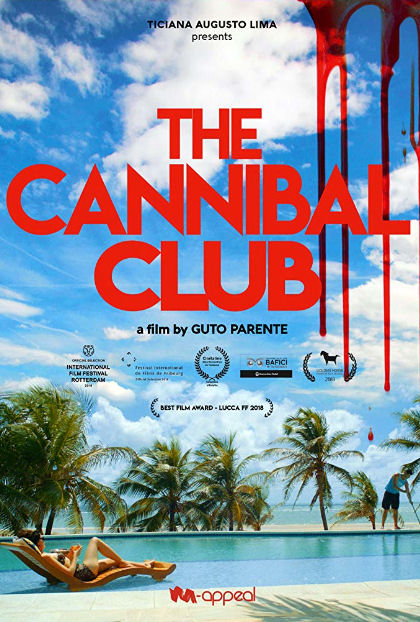 Brazilian socialites Otavio (Tavinho Teixeira) and Gilda (Ana Luiza Rios) have it all, spending their days poolside with servants waiting on their every need. When your every need is cared for, the things you want grow more elite. Their tastes have grown more refined having it all. Otavio likes to hide while watching other men have their way with his wife. Just when the men reach the point of orgasm, he likes to kill them. The ultimate euphoria; a climax to life at life’s greatest climax. Then they like to eat.

Both Otavio and Gilda are prominent members in The Cannibal Club, an elite group of wealthy member of Brazilian society whose tastes have developed for the most plentiful but rare forms of meat. When Gilda accidentally discovers a secret of their clubs powerful political leader, her and her husband’s lives are suddenly the ones in danger. The circle of life is so simple yet so complex. The life of others keeps us living, just as our lives can feed theirs.

A highly erotic for eroticism’s sake film with realistic depictions of sexual actions, Guto Parente’s The Cannibal Club is blatant, vulgar, unrefined without a lot of the needed artistic expression. It’s gratuitous for gratuities sake. It goes for shock value but we’ve seen it all before. A cannibalistic society is built Faud Ramses would gladly be part of. Even with language barriers some performances are obviously limited. Then with one final blow everything changes. A long build of hard to watch full frontal nudity and fulfilling your every carnal and gluttonous desire is ended abruptly, with meaning and fulfillment. I guess you could say the sex was bad for me, but what a climax.