Watching Movies - Artifact of a Love

of “Artifact of a Love” 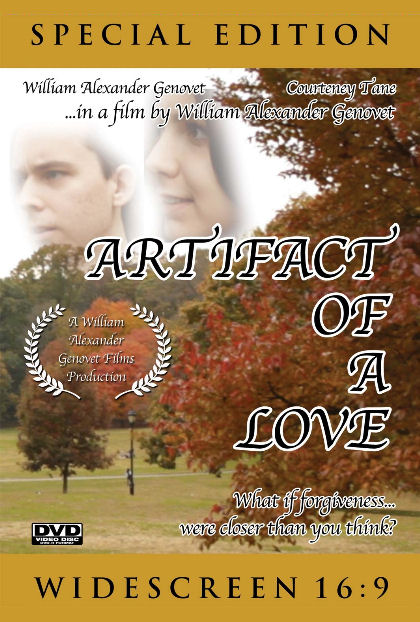 Open your eyes Jonathan. Jonathan Winterspeak (William Alexander Genovet) is pretty smart for a white boy about to die. He cannot erase the memory of killing Angela Summering (Courtney Tane). As an earth bound angel Angela visits him as the Gangster (Sal) approaches to kill him, but this is not how he dies. Though he tries to forget her, you cannot erase an artifact of the heart. It is the love story ending of the beginning of a sci-fi epic.

William Alexander Genovet is literally among the best directors I know. I don’t think anyone does casting better than he does. Along with his sidekick cinematographer Sal, they have completed their masterpiece to date. Cinephiles their entire lives, the best friend, no budget, short filmmakers have finished their first live action short, complete with actors. “It’s a good film”, it has everything but a nude scene.

Artifact of a Love is an awful, inexperienced, out of focus, juvenile, film school failure experience with an awful font and some of the worst performances in the history of cinema given by Genovet himself, his filmmaking partner Sal and the pretty but talentless Courtney Tane. How Artifact of a Love got a DVD made of it is beyond me. As a five minute short film with two minute opening credits and three minute end credits the self-serving filmmakers would rather see their names on screen credited for their creation than actually making something worth watching as the credits roll longer than the actual film.

“It's horrible, don't get me wrong, but it's also kind of amazing in it's horribleness.” - Amazon.com customer review

“The filmmakers who made this film had no awareness of how awful they are as people.” - Amazon.com customer review

“…a train wreck that I couldn't look away from.” - Amazon.com customer review

Don’t matter your brain with this review or how it appears, for that is not for you to worry about. What matters is what I have to tell you. The saving grace of this travesty of film is the special features if you buy The DVD. While the film itself is a near abomination to cinema, the special features, audio commentary, interviews, short films, audition tapes, behind the scenes look which is longer than the film itself and a teaser of what’s to come from the filmmakers are actually very entertaining. It’s also an excellent way to find out how to make a unique film without a budget. If this was an unboxing of the DVD, it would be highly rated, The DVD is worth checking out. As a short film review of Artifact of a Love it’s atrocious.