Review of "The DVD” by The Headless Critic 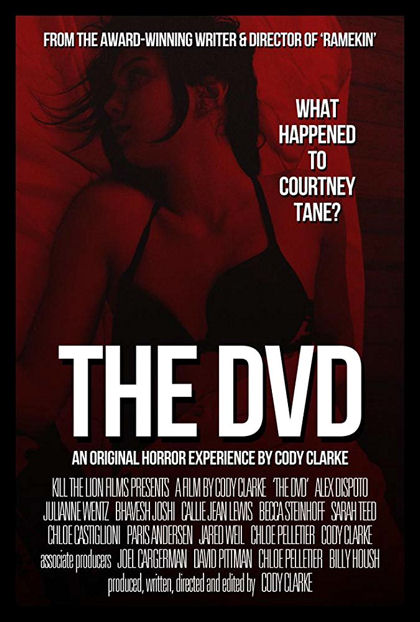 Two young, independent filmmakers have gotten their first short film, Artifact of a Love onto DVD. With no budget director William Alexander Genovet (Alex Dispoto) and Sai (Bhavesh Joshi) act in their own film hiring a single actress Courtney Tane (Julianne Wentz) to make the ending of their sci-fi feature script into a short. The special features of The DVD reveal the wannabe filmmakers true nature and a hidden obsession that has kept them wanting more.

Before movies were available to view through streaming services at the click of a button, audiences would take home the DVD and discover all the wonders of the disc inside. When you have no budget, you’re forced to be creative to entertain. Cody Clarke is a brilliant independent filmmaker with three creative features already on his shelf and his fourth film The DVD trolls audiences in what is a creative and entertaining interactive movie experience. Each click of the button on the Artifact of a Love DVD tells another piece of a story that gets dark very quickly.

With a cast of primarily three and some fun audition tapes, Alex Dispoto, Bhavesh Joshi and Julianne Wentz show their talent through bad acting. Their interview segments and behind the scenes footage show a yin yang of good and intentionally bad performances. Out of focus shots, an intentionally torturous short with don’t matter your brain dialogue is hard to get into unless your understand what is going on.

It's a short within a movie that is told through the special features of a DVD. Its imperfections are nearly perfect. Cody Clarke's first two films released Ramekin and Mute Date are also character based but with characters you'll fall in love with. The only redeemable character on this DVD is Courtney Tane. Although she's a cute, aspiring actress who deserves better than to be an Artifact of a Love, she isn't given depth for us to fall in love with her as I did Emily and Noah. I also could have used a little more horror in the last couple of clicks of the menu options.

For those looking for traditional movie storytelling, you’ll find The DVD a failure to entertain. It is the Andy Kaufman performance of DVD’s. Those who get it will appreciate it for its brilliance.