Review of "Hellboy” by The Headless Critic 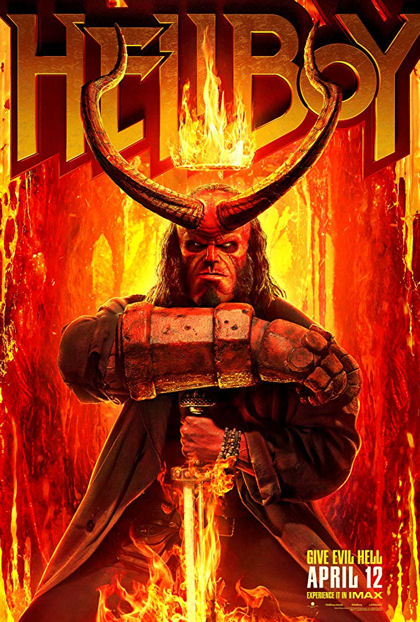 In the reign of King Arthur there grew a witch so powerful, it’s said she had to be stopped by Excalibur itself. Cut into seven pieces, Arthur spread her remains in the seven corners of the earth. Hundreds of years later, the Blood Queen (Mila Jovovich) rises again. Mankind’s greatest hope comes from hell. Summoned by Nazi’s decades ago Hellboy (David Harbour) has been raised on earth by demon hunter Professor Broom (Ian McShane) to be a weapon to fight evil. With the Blood Queen’s return a prophecy has been foreseen and the evil forces that have faced Hellboy are now mankind and demon alike.

The 2019 redo of Hellboy which originally came to the big screen in 2004, removes the demon savior of earth from North America and the artistic hands of Guillermo del Toro in place of the Neil Marshall led European Hellboy. It’s the English version of the Mexican director’s film. del Toro’s Hellboy is a fantasy, action, horror film while the Marshall version is more comedy, action, super hero. With little backstory or explanation that is somehow still all backstory explanations, we’re thrown into world we're not completely familiar with unless you read the comics, full of CGI monsters to be sent back to hell. Computer animation monsters are annoyingly not the best. Character depth is dense, the monsters are plentiful and the bad guys origins simply lacking.

Mila Jovovich calls in her performance in a role she just doesn’t pull off. Ian McShane collects yet another paycheck from a big budget movie that doesn’t offer him a role worthy of his acting talents. In 2004, underutilized actor Ron Perlman was cast perfectly to play Hellboy skyrocketing the aging actors career in a role he was seemingly born to play. Stranger Things star David Harbour surprisingly lives up to Perlman’s performance defining his own version of Hellboy that’s a little more humorous, a bit more stupid but a worthy successor to Pearlman. Overall it’s an entertaining popcorn flick that is sometimes annoying and simply forgettable.