Review of "The Curse of La Llorona” by The Headless Critic 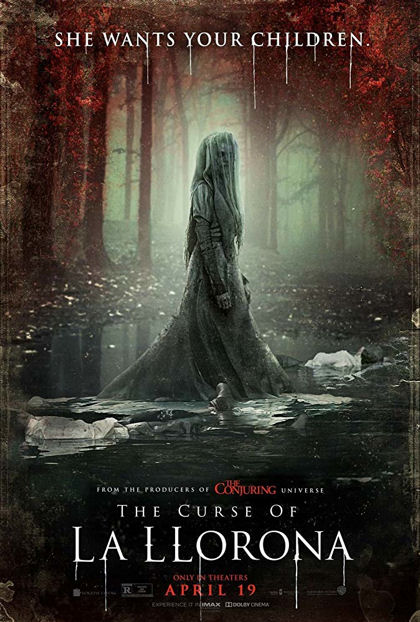 Three hundred years ago the most beautiful woman in all of Mexico met a handsome, wealthy rancher whom she married and bore to him two children. They did not live happily ever after. One day the beautiful woman caught her husband with another woman in his arms. In an insanely jealous rage she took from him the thing that was most precious to him, their children. Unable to live with herself once she realized what she’d done she then took her own life. It is said that her spirit still roams the earth looking for children to replace her own. She has become a folk legend parents tell their kids to get them to behave. "If you don’t listen La Llorona will come and take you away." Some legends are real.

When overworked, single mom, social worker Anna Tate-Garcia (Linda Cardellini) walked in the Alvarez home it wasn’t for the first time. The mother of the Alvarez home Patricia Alvarez (Patricia Velasquez) seemed scared this visit. Upon exploration of the home Anna found the two young Alvarez boys locked in a closest. Patricia said she was protecting her children from the evil spirit outside. Anna had no choice but to remove the Alvarez boys from their home and their "protective" mother. Anna did not realize the evil she had released to haunt her own two children at home. When her son Chris (Roman Christou) hears the weeping of La Llorona (Marisol Ramirez) the children become attached to the weeping bride. Not even the church can help this haunting.

A spin-off of a spin-off, this curse falls under the umbrella of the growing Conjuring universe with a loose connection to Annabelle in Father Perez (Tony Amendola), who's a good character to follow. Director Michael Chaves helms his first feature in La Llorona but he is also slated to direct the upcoming The Conjuring 3. Writers Mikki Daughtry and Tobias Iaconis also pen their first feature film but the duo also have another movie currently in theaters that’s completely different in the love story Five Feet Apart. With the exception of some very fake looking steam coming off a cup of coffee, the production values in this third rate production are just as good as any other in the Conjuring universe.

With most of Hollywood casting twenty-somethings in every big budget film, The Conjuring universe has always representing age appropriation in their characters for the roles. This cast is full of talented veteran actors led by Linda Cardellini and including supporting roles from Tony Amendola, Sean Patrick Thomas and Raymond Cruz as the outcast, on the fringes of society, I mean, fringes of the church and that which is holy former preacher Rafael Olvera. Olvera is a good character played well by Cruz. I wouldn’t be surprised to see Cruz leading the next layer of Conjuring spin-offs.

The real curse of La Llorona is being a cookie cutter, by the numbers, ABC’s of horror film that follows modern day jump scare moments and rarely strays from anything that’s expected. Marisol Ramirez is completely overexposed as La Llorona, with an excellent weeping bride scene that’s worthy of the video game Left 4 Dead’s the Witch. A good enough horror film that just doesn’t offer any originality, La Llorona has some cringe-worthy scenes for all the wrong reasons including the little girl Samantha (Jaynee-Lynne Kinchen) reaching for her doll outside. The big ending comes with a much wanted action oomph but is totally ruined with excessive use of poor CGI. The perfect ending for a cookie cutter modern day horror film.