Review of "Umbilicus Desidero” by The Headless Critic


Watching Movies – Without Your Head

Production by: Launch Over 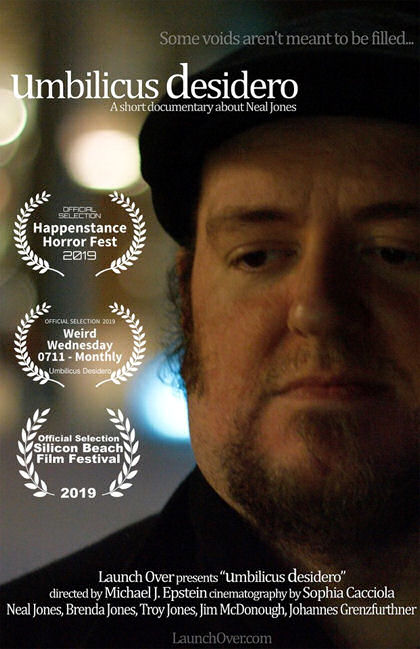 You should live every day like it’s your last because you never know when your life will be forever changed. For Neal Jones that happened unexpectedly when he had to have a life changing surgery. He was once all man but now he is only a fragment of his former self. The umbilical cord is a connection to life between mother and child. It holds stem cells that can treat cancer, anemia, and the immune system holding the DNA to the miracle of life itself! That connection from the mother to the child is via the belly button. Now for Neal Jones, that connection is gone. Life is precious. Once lost it cannot be gotten back. Once changed, some lives are no longer worth living. Some things cannot be replaced once they are gone. Some men cannot be fixed once they are broken. “Some voids aren’t meant to be filled.”

Experienced director, writer, musician and mohawk connoisseur Michael Epstein along with his Launch Over and life partner, cinematographer, musician, sound department specialist and half shaved head aficionado Sophia Cacciola take the real life tragedy that is Neal Jones’ life and turn it into something almost worth living for. The pretentiously titled Umbilicus Desidero is a short film mockumentary documenting the very real life loss of actor, radio host and horror historian “Nasty” Neal Jones’ belly button. After a near fatal battle with diverticulitis, post-surgery difficulties with hernias had doctors taking Neal back under the knife in what would end up being a hernia cure that cost him his belly button. He’s not like the other boys.

“It’s not a belly button vacation.”

Before there was the term "podcast" Neal Jones had his own podcast, before there was a surgery Neal was a whole man. Scarred for life, the longtime radio comedian steps in front of the camera for once to make light of his very serious situation in a mock documentary about the half-man with no belly button he has become. The brilliance of director Michael Epstein is to let the experienced radio host who’s used to adlibbing, run wild with his own dialogue. Neal plays the role of himself so straight the audience will feel empathy for the sad story of his life. It isn’t until a quarter of the way into this four minute short film that we even realize Neal’s life is a comedy. When Brenda Jones speaks of her son Troy and her half of a son Neal, that’s when the comedic genius of Neal’s serious portrayal is revealed. The man who has taken to the internet airwaves for the last fifteen years with his podcasts on WithoutYourHead.com, InYourHead.com and the surely soon to come Without Your Belly Button podcast, finally gets to unleashed his demented belly button-less comedy on the world through this film.

“One way that a heroin addict is lucky…”

As a writer for Without Your Head I must state that the review of Umbilicus Desidero is absolutely and honestly unbiased. I loved it. In four minutes I cared about what was happening. I got fooled for just a minute into thinking this mockumentary was real even though I knew the actual story. Most importantly I laughed, a lot. Did I enjoy the four minute short film more because I actually know the subject in question, Neal Jones in person? I do not know. What I do know for sure is it’s a beautifully shot film by director Michael Epstein and cinematographer Sophia Cacciola, compactly edited together well by Epstein with a wonderful and intimate score by the lovely Sophia Cacciola. I may have enjoyed Umbilicus Desidero more by knowing the subject of the doc Neal Jones just as someone who likes baseball may enjoy a documentary about it more than someone who doesn’t watch the sport. I still believe there are laughs for everyone except perhaps those inconsequential few people who still feel ghost lint in what was once their belly button. But do those people even matter?

“Where once was a nice puckered hole, is now just a smooth belly.”