Review of "Godzilla: King of Monsters” by The Headless Critic 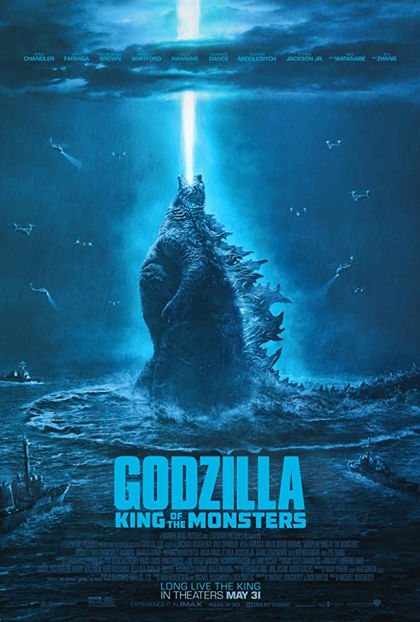 Five years ago a giant monster rose from the sea, destroying buildings, killing thousands and saving the world. Some governments and people want that creature dead; others worship him as a God. The crypto-zoological agency Monarch has been studying Godzilla and searching for other giant Titan monsters for the last five years. Under constant threat of a government takeover, a rogue member of the rogue group Monarch decides to awaken the monsters the agency has found so far. When the three headed King Ghidorah is awakened, a battle for alpha monster forces Godzilla to rise from the depths once more and try to save his world again.

In 2014, the American made Godzilla was revamped with Monsters director Gareth Edwards helming a collaboratively written script lead by Max Borenstein who would have no notable credits to his resume at all to warrant such a position. For the Max Borenstein co-written Godzilla: King of Monsters, Trick ‘r Treat and Krampus director Michael Dougherty takes over directorial duties. The end results of the change of guard is an evolution of the series that is different, somewhat lacks inspiration and creativity under big Hollywood budget filmmaking but retains an overall direction of sequels to come.

Unlike most Japanese Godzilla movies and the 2014 American made Godzilla, the monsters get more screen time than usual, although humans below still tell the story of why the Titans do battle. Godzilla aficionado’s may take displeasure with the monsters excess screen time, the use of the term Titan over Kaiju and Godzilla having a love interest. Having never watched a Godzilla movie made for Japan I only take note with the fourteen year old star of Stranger Things Millie Bobby Brown cussing throughout the film. I realize the child actress may want to break out from her child status role as seen by audiences but it’s so out of place and excessive in the movie it’s off-putting.

Godzilla: King of Monsters is a big budget Hollywood monster movie. Not exactly my kind of film. Seventeen “Titans” are mentioned with several making appearances most notably Godzilla, King Ghidorah, Rodan, Mothra and you guessed it King Kong. Kong is seen and Skull Island mentioned at least twice to set-up a potential Godzilla vs. Kong movie which seems to be the ultimate goal of the series with Max Borenstein seemingly head of both Kong and Godzilla scripts. I personally prefer story based films like the 2014 Godzilla director Gareth Edwards’ Monsters over CGI battles. For a giant CGI monster movie it looks great. Mothra is beautiful, Godzilla in intimidating, the Legendary Films created woolly mammoth Behemoth looks ridiculous but it's a fun watch that I will probably be forget by the time the next film is released. Why do I think that? I mostly forgot the last Godzilla movie in the five years between films. I’m also not sure die hard Godzilla fans will take it as freely as I did.