Review of "The Dead Don’t Die” by The Headless Critic

Production by: Animal Kingdom
in association with: Film i Väst
Distribution by: Focus Features 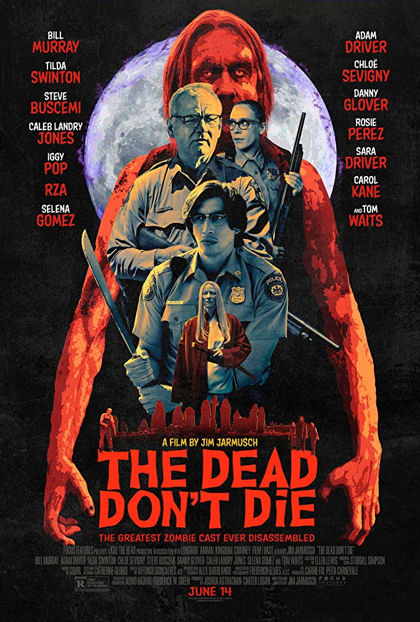 Polar fracking by the U.S. Government has caused a polar shift offsetting the world as we know it. Night has become day and day has become night. The animals have all gone hiding from the dead which have risen. Centerville, USA is a good place to live but this isn’t going to end well. Centerville police Chief Robertson (Bill Murray) and officers Peterson (Adam Driver) & Morrison (Chloë Sevigny) are tasked with protecting their town from the undead. Easily said but tonight, the dead don’t die.

This self-aware zombie comedy from writer and director Jim Jarmusch assembles “The Greatest Zombie Cast Ever Disassembled”. Bobby Wiggins (Caleb Landry Jones) is called Hobbit, Baggins and Harry Potter throughout the film. Wu-Tang member RZA works for Wu-PS shipping in the film. Tilda Swinton basically plays her Doctor Strange character The Ancient One but as a mortician with long blonde hair and a sword. Steve Buscemi, Tom Waits, Iggy Pop, Danny Glover, Carol Kane and Selena Gomez are just a few of the other undead celebrity names who might not die tonight.

As off-kilter as the earth’s axis in the film, this deadpan comedy is as artistically unfunny as a Wes Anderson movie and I’m not just saying that because it also stars Bill Murray. Opening slowly The Dead Don’t Die sets up a punchline that it never delivers. As the zombies climb from their graves, our hero’s arm themselves. Great actors and fun performances are ruined by being self-aware that the undead are coming because they “read the script”. When it’s time to deliver the action, instead of going gory in a glob of zombie goop, the dead die in a black mass of CGI zombie dust. It’s a highly unsatisfying ending to a zombie, even in a comedy.

Jim Jarmusch is a veteran director who’s been around for forty years. Unless you’re a film aficionado like Bobby "Bilbo" Wiggins, you’ve probably never heard of him and it’s probably for a reason. With his greatest box office success possibly being the limited released Broken Flowers in 2005 starring Bill Murray or perhaps you know the black and white Johnny Depp movie few have seen Dead Man, Jarmusch is an actor’s director not one for commercial success. The Dead Don’t Die has all the potential to be a fun popcorn movie of celebrity deaths or even a future cult horror zombie favorite like Zombieland but instead slowly slips into mediocre nothingness sending an environmental message in a cloud of black CGI dust.