Review of "Driven” by The Headless Critic 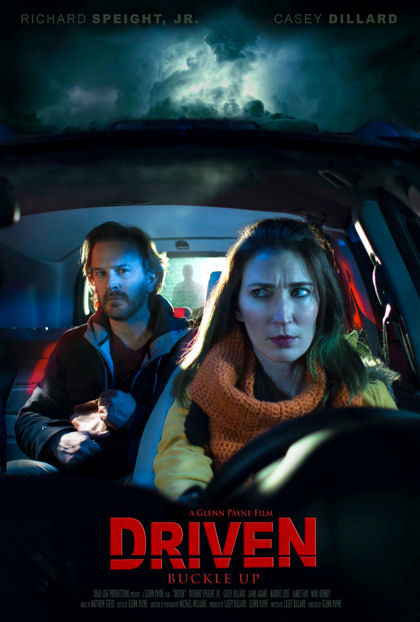 Her name is Emerson, Emerson Graham (Casey Dillard). Comedian by night, well sort of, Ferry app driver for hire by other nights. Driving around drunks and weirdo’s and assholes isn’t exactly a glamorous job but she loves being in her car and away from life’s problems. The extra cash is also needed so maybe someday her and her roommate can have a flushing toilet that doesn’t require a poop spoon. She’s a good driver too. Tonight’s ride is just a little different. Tonight’s passenger is a demon hunter, for lack of a better word. A demon hunter Roger (Richard Speight Jr.) and a cabbie team up for “A Frighteningly Funny Ride” making stop after stop, battling what’s best described as demons throughout an adventure filled night.

An independent feature that is dialogue and character driven and just so happens to have demons in it. Writer and star Casey Dillard creates a film about monster hunting with director Glenn Payne that takes place almost entirely within the confines of a car. It’s a pretty creative way to make a film on a budget. This is no action movie. Without the “demons” it could have easily been a relationship comedy in the way of the Odd Couple. Don’t expect any special effects either. Driven does something better than most action films creating realistic characters and relationships and telling a fun story.

Like any good character based story, Driven sticks with the audience and is a film I could easily re-watch again and again. The most crucial part of filmmaking is good writing. While an elaborately creative story isn’t Driven, realistic relationships, characters and dialogue within a demonic movie are what make this film. When Hollywood isn’t offering the roles you want Casey Dillard wrote one for herself. Her realistic performance stands out in the film. Richard Speight Jr. also impresses as the male lead reminding me of Will Forte in the role. The horror levels are very low in this independently based thriller but if you want to know what a poop spoon is, it’s definitely worth checking out.

“Thank you for riding with Ferry, we welcome feedback to help improve your customer experience.”