Review of "Annabelle Comes Home” by The Headless Critic 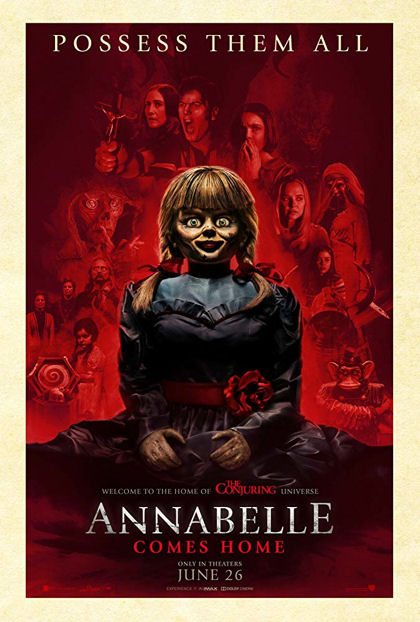 In a locked room down the stairs in the back of their house, Ed (Patrick Wilson) and Lorraine Warren (Vera Farmiga) keep artifacts from cases they’ve worked on that are possessed, cursed or have taken part in real life human tragedies. The most dangerous of all of these possessions that’s kept locked in its own private blessed cabinet within this locked room is a little doll named Annabelle. This is the story of what happened after the Warren’s took Annabelle. This is the story of when Annabelle Comes Home.

Mary Ellen (Madison Iseman) is the usual babysitter for Judy Warren (Mckenna Grace). When her parents leave town for a few days, Mary Ellen stays with Judy in the Warren house. Hearing of the Warren’s famous cases of supernatural events, Mary Ellen’s best friend Daniela (Katie Sarife) decides to invite herself over to see if she can find something strange in the paranormal investigators home. The one item in the Warren home you don’t want to touch just got unleashed from her private confines. When the Warren’s are away, the children will play. Three kids must survive a night where all the entities held within the Warren house are unleashed.

Taking place in the time period just after the Warren’s took Annabelle in The Conjuring and just before The Conjuring 2, there’s a nod in Annabelle Comes Home to another Conjuring spinoff The Curse of La Llorona which takes place at the same time circa 1972. The Warren’s are kept the most intriguing characters in their universe because we never get to see them much as their films are always focused on the troubled people they help. What made The Conjuring the success it was that spawned this franchise were the kids in the first film. Judy Warren (Mckenna Grace) is the most intriguing character created or in this case, expanded upon since the franchise’s inception. Mckenna Grace is phenomenal in the role of the Warren’s young daughter, really making you care about this outcast little girl the other kids deem weird because her parents are demonologists. Proving the Warren’s really are the lead characters of their franchise, even little Judy.

Seemingly for the purpose of the film the Annabelle doll is expanded upon from a doll with a demon attached to it, to becoming a beacon, drawing all things paranormal to her. A world of potential spinoffs is created as the artifacts kept in the Warren home come alive. The plot seems like one I’d scoff at much preferring the telling of the individual cases and how the artifacts came into the Warren’s possession instead of bringing them all alive at once to attack the home in a very unfortunate night. It somehow still works. The Ferryman, the Hellhound and the Cursed Samurai are just a few of the potential films to come from The Conjuring universe touched upon in Annabelle Comes Home. While legend of The Ferryman is intriguing to me, I don’t think the pop-horror Conjuring franchise could make a good werewolf or hellhound movie that would interest me.

One thing you can count on in any movie from The Conjuring universe is they’ll fall to their own jump scare cliché’s that are currently changing horror films instead of falling to the old cliché’s of horror. Annabelle Comes Home is no different, offering plenty of jump scare moments that will mostly fail to any experienced horror fan but they do it in the best way. All it takes for any successful movie is to make you care about a character. With the elder Warren’s mostly gone, little Judy is brought to life by Mckenna Grace enough to make this an enjoyable watch with back up roles by Madison Iseman and Katie Sarife. Whatever formula used in this spinoff sequel, it worked for me better than the previous incarnations and I’d like to see Gary Dauberman in the director’s chair once again.