Review of "Nightmare Cinema” by The Headless Critic 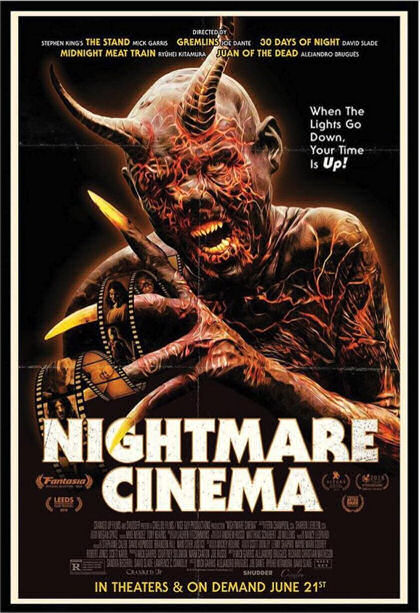 When you see your name on the marquee of the empty, rundown Rialto Cinema, the Projectionist (Mickey Rourke) a curator of nightmares has fired up a film just for you. The spotlight shines on where you will sit as the projector glows your bloody face onscreen in a story of your life. There are five nightmares playing at the Rialto tonight.

The Thing That Lives in the Woods:
There’s a killer Welder (Eric Nelson) in the woods and he’s about to set your night on fire. People die by the light of his blow torch but the killers will die at the heel of his boot. It’s a cliché slasher that’s almost comical but with a sci-fi thrilling turn that will make your phobia’s tingle. You’ll be wishing you were dead.
Directed by: Alejandro Brugués
Written by: Alejandro Brugués

Mirari:
Cosmetic imperfection, a life lived looked at for all the wrong reasons. The scar on Dani’s (Stephanie Cood) face cannot compare to the emotional scars of living a life being stared at. She just wants to look beautiful for her handsome new boyfriend David (Mark Grossman). Now she’s not sure if the evil Dr. Mirari (Richard Chamberlain) is trying to kill her or if the drugs they gave her are making her paranoid. Love is the price you’ll pay for beauty.
Directed by: Joe Dante
Written by: Richard Christian Matheson

Mashit:
The only thing that stands above the church is its students plummeting to their deaths. Sometimes it takes death to make us realize what’s really going on in life. At a Christian boarding school the students are being possessed. Suffer the little children as they fight the devil until dawn breaks a new day. Goodnight children.
Directed by: Ryûhei Kitamura
Written by: Sandra Becerril

The Way to Egress:
Excuse me... Helen’s (Elizabeth Reaser) pleas for help go unheard by an uncaring world of nightmares. The world’s so dirty and no one will help. Now her children have gone missing. As a mother losing touch with her sanity, her last attempt to find her children may be the death of her.
Directed by: David Slade
Written by: David Slade & Lawrence C. Connolly

Dead:
Dead. Dead on the operating table for a full seventeen minutes. Riley (Faly Rakotohavana) lost his parents and his life to a carjacker. Now he awakens to see dead people. His killer has returned to kill him again. Even though his parents are dead, he’s still not alone and his killer isn’t the only thing after him. There are a lot of creepy things that happen in hospitals. There are a lot of people who die there.
Directed by: Mick Garris
Written by: Mick Garris

Do you think you can escape the future that’s already been told? When Mickey Rourke runs a cinema it’s a thing of nightmares. In Nightmare Cinema the audience is lured into the films that touch a little too close to home. The nightmare in this cinema might not be the films you view on screen but why your reliving the nightmare at all. Five famous directors behind such films as Gremlins (Joe Dante), 30 Days of Night (David Slade), The Midnight Meat Train (Ryûhei Kitamura), Juan of the Dead (Alejandro Brugués) and The Stand (Mick Garris) are brought together in a horror anthology hosted by Projectionist Mickey Rourke in a wraparound story.

Anthologies are an excellent way to combine short stories into something you can view in theaters or buy to add to your collection at home. Not every story that needs told runs an hour and a half. Nightmare cinema is a collection of shorts from top directors of the 80’s, 90’s, 00’s and today, utilizing the masters of horror in some amazing stories completed with an interesting character in Mickey Rourke’s Projectionist that could lead to further showings at the Rialto Cinema. It’s an anthology done right providing five very different tales from an array of directing talents.