Review of "Crawl” by The Headless Critic 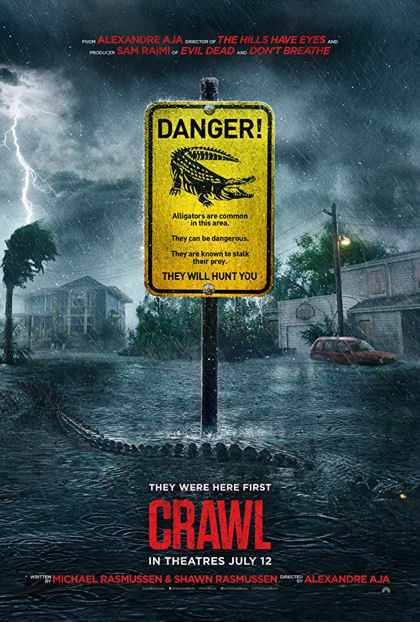 “DANGER! Alligators are common in this area. They can be dangerous. They have been known to stalk prey. THEY WILL HUNT YOU”

A category 5 hurricane warning has been issued for the state of Florida. Residents are asked to evacuate as emergency services and personnel will be limited. Before leaving Haley Keller (Kaya Scodelario) has to find her father Dave (Barry Pepper). While trying to save her dad from a deadly hurricane they find themselves trapped in a house being flooded by alligator infested waters. A storm bearing down outside, waters are rising and gators are hunting you inside your own home. There’s no one to call for help. “If the storm doesn’t get you… they will.”

Haute Tension (2003), The Hills Have Eyes (2006), Mirrors (2008), Piranha 3D (2010), Horns (2013), The 9th Life of Louis Drax (2016), Crawl (2019) is the seventh horror themed feature to come from the breakout French director Alejandro Aja since his immediate cult favorite High Tension hit America fifteen years ago. From a script brought to us by the brothers Michael and Shawn Rasmussen who wrote The Ward (2010) that was picked up by Sam Raimi’s production company. This is your Syfy creature feature of the week that’s done right.

When making a movie about any killer animal the two most important things are to make the audience care whether your characters live or die and to make your creature look good. Barry Pepper garnered a lot of promise a decade ago but never got the recognition he deserves for being an underused Hollywood gem. Even in a movie about killer alligators his performance is excellent. Kaya Scodelario, who I’d never heard of before this film comes in with a ten year acting career behind her. The Hollywood beauty is portrayed realistically as a girl next door, father’s daughter who isn’t just an inappropriate sex symbol like most creature based horror films would do. She doesn’t care to get dirty and fight off some alligators to save her dad and herself as anyone would do in that situation.

If the alligators in Crawl were computer animated I certainly couldn’t tell and that’s the greatest compliment I can give this film. Without an immense knowledge of alligators beyond what Steve Irwin taught us when we were younger, the gators in Crawl are portrayed realistic enough to be believable. They are slow, they hunt by movement under water and they work within the film due to bad situations and sheer numbers. On top of killer looking creatures, the Category Five stormy weather is done beautifully. Aside from some very brief but very fake CGI spiders Crawl is a beautiful, creepy film to watch in theaters. I watched it with my legs up just in case gators got in my theater. It made me feel like a kid again.

There are cliché horror moments of bad decision making and perfectly bad timing done throughout the film that will make some people’s eyes roll in what is mostly otherwise a realistically done movie. As realistic as you can do alligators in your house anyway. The history of Haley Keller being trained by her dad to be a swimmer alone sets up a background that’s a little too perfect of a father, daughter dynamic for the challenges they’re about to face. I don’t mind such cliché moments of backgrounds, bad decisions and circumstance, it wouldn’t be a horror movie without them.

Alejandro Aja’s Crawl is the best alligator or crocodile horror film I’ve seen surpassing the comical Lake Placid (1999), the poorly marketed Rogue (2007) and even the longstanding favorite for most about New York sewer gators gone bad Alligator (1980). It’s an excellent summer creature feature that will make you lift your legs up in the theater. It might even do for swampland crawlspaces what Alligator (1980) did for the New York sewers and make you terrified to go underneath your house. See you later alligator.