Review of "D-Railed” by The Headless Critic 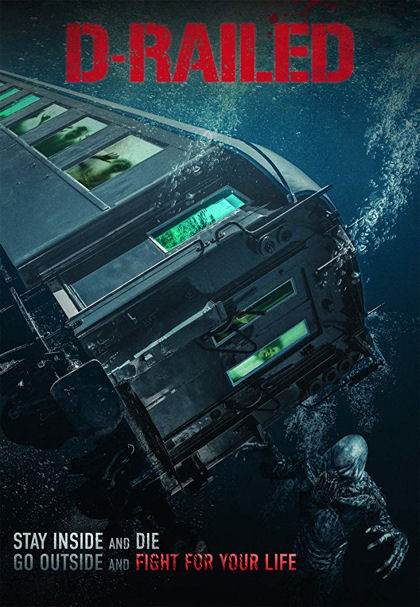 A private party train for a Halloween murder mystery is unexpectedly derailed when a group of thieves board the train looking to steal something a little more valuable than costume jewelry. The Conductor (Jack Betts) does his best to keep this train on track but when the passengers fight back the caboose ends sailing over a bluff into the waters below. There’s something worse than murdering thieves lurking in these murky waters. “Stay inside and die, go outside and fight for your life.”

The first part of co-writers Suzanne DeLaurentiis, writer and actor Everette Wallin and writer and director Dale Fabrigar’s D-Railed is a 1920’s murder mystery train that’s portrayed just as over-the-top as you’d expect the acting on a murder mystery train to be. The second act is man against beast as the survivors of the train crash are pitted against an underwater monster that’s a practical suit worthy comparison to The Creature from the Black Lagoon. The final act is a journey on land, a fight for survival as creature doesn’t give up so easily on its prey.

Unfortunately not even a small role from veteran actor Lance Henriksen can save the performances in this one. Lead actress Carter Scott and young Shae Smolik leave the most lasting impression of good performance but the time period they intended to capture comes across as being out of place, appearing as poor acting widespread throughout the film. The final act of the film with the creature in pursuit, a limited cast and scenes of action are the most enjoyable of the movie.

A few twists and turns from a creative script isn’t executed well enough to have many surprises. The underwater creature is given away in the poster for the film banking on a final twist that just isn’t portrayed well enough on screen to be shocking. I do love the creature suit even if the budgeted film had to do a lot of cutaway scenes. The use of practical effects is also appreciated. There aren’t many death scenes on screen but there is a wicked head implosion which will always be appreciated here at Without Your Head.