Watching Movies - High on the Hog

Review of "High on the Hog” by The Headless Critic 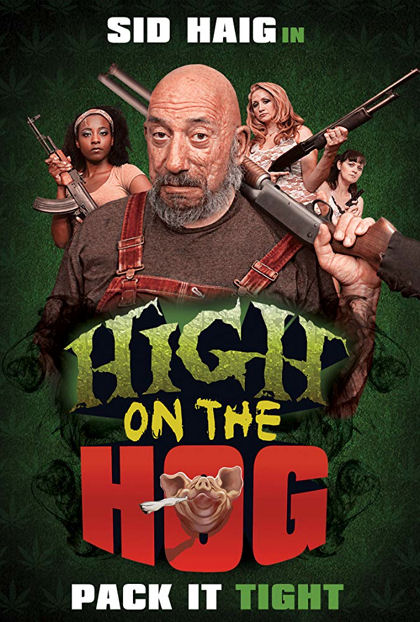 “So it begins, we’re simple folks. Hell this here farm has been in my family since the war between the states. We farm hogs, chickens and have grown our fair share of corn, wheat and beans. The most important thing we’ve raised is our families. Then came the damn corporate farmers trading family for dollars. The small farmers started to feel the pinch. Those that didn’t go belly ended up bending over and selling out to these assholes. When my paw died I made a promise to myself that ain’t nobody going to take our family farm away but I didn’t plan on growing marijuana. Damn this shit is good. Pappy always said it isn’t about where you end up it’s about the ride so strap yourself in, fire up a big fat one and remember, pack it tight.” – Big Daddy

Down on the farm small town life is all about family, a different kind of family for Big Daddy (Sid Haig). His adopted household Laura (Sierra T. Mong), Lola (Brenda Whitehead), Lenore (Fiona Domenica) and his mute, shirtless farmhand Jimmy (Adam Budron) just got a new addition to the family Lucy (Katrina Hall). Like all of Big Daddy’s girls, Lucy is running from a bad home life and in her case an abusive uncle Agent Dick (Joe Estevez). The last thing Big Daddy needs is the police looking around on his land. On Big Daddy’s farm they grow wheat, corn and cannabis and one of those weeds isn’t legal. Big Daddy’s farm-grown weed is the best in North America. The Mayor (Robert Z’Dar) overlooks Big Daddy’s operation but now he’s got a Federal Agent dick snooping around his property. This farm has been in Big Daddy’s family for five generations. His pappy died to save it. If someone wants to take it from him they’re going to have a fight on their hands.

“You’re listening to Mary Jane (Ellie Church) on KUSHFM where we always say yes to drugs.”

Director and co-writer Tony Wash attempts to resurrect refer madness casting two veteran actors in the beloved Sid Haig and Joe Estevez in opposite lead roles of cannabis kingpin and fledgling detective. High on the Hog forgot to pack it tight adding random scenes of marijuana madness to stretch what could’ve been a tight short feature full of witty, reefer rich dialogue delivered excellently by the humorous veteran actor Sid Haig, who doesn’t get enough credit for his comedy, into a film that barely holds it's filler scenes together. The only thing more abundant than weed and naked women are the intentionally bad effects. Lots of shots of cars driving down the road, naked women in strip clubs, claymation and Batman tv series level of action scenes are set to grindhouse filters that are supposed to make the movie look like it was actually recorded on film and not digital. The 1970’s editing job is something even Quentin Tarantino era inspired films don’t go so far to reproduce. A reedit without the filters and random scenes could have made this a forty minute short feature that would have been packed tight with good dialogue at the end of Sid Haig’s comedic delivery.

"I think that last paragraph turned me into a poet."

This would also mark the last film for veteran actor with a famous look Robert Z'Dar. Z'Dar who's known for playing bad guys in action films goes out playing a good guy in a very fun film.