Review of "Azrael: The Theta Girl 2” by The Headless Critic 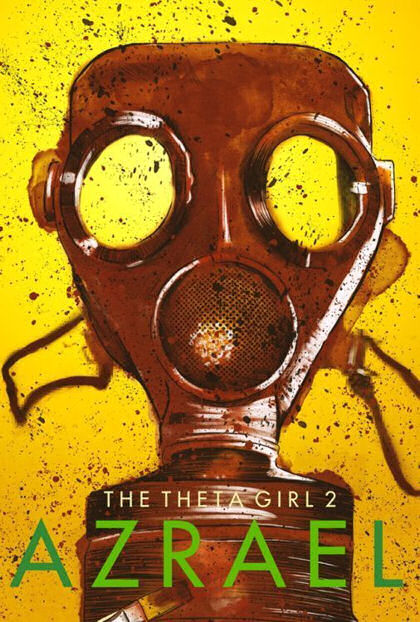 “I watch the tv and it’s just one awful thing after another, drugs and the nasty language and the nudity.”

She’s the last Shogun (Caley Fleming), the warrior heir to a chemical kingdom. Edward and Mae Shogun, better known as Papa (Mike Amason) and Mama (Len Marini) created what became known on the streets as the god molecule, the little yellow party pill that set the world on fire. The last time someone made some of this shit a bunch of fucking people got killed including her grandparents. They lived, they died and all that’s left of them is her. What is she going to do with it? “Grandma and grandpa sold a lie, it just so happens they believed it.” Ros Shogun is going to recreate her grandparent’s drug but she doesn’t have the full formula. What she creates is poison.

Morris (Aaron Blomberg) is a good boy, a very good boy. He’s having a hard time. Those drug dealers are awful, awful people. He lost his brother Bobby (Aaron Blomberg) to the world of drugs, now he seeks vengeance for his brothers death. The follow-up film to The Theta Girl is set in a future where Ros Shogun, granddaughter of the creator of the theta drug, puts a gang of badass girls together in twins Caley (Morgan Jones) and Haley (Leah Jones) as she tries to recreate her grandparents theta drug empire. She meets resistance in a vengeful brother, a newly promoted cop to Detective Kearsey (Scott Means) and a crime scene clean-up girl with a tendancy to take from her crime scenes Millis (Catherine Hunsinger).

Less inspired by hippie philosophy and spiritual expansion, there’s just as much sex, love and furry full frontal male nudity as the original Theta Girl in this money making inspired attempt at theta resurrection. Theta girl writer David Axe expands on his Theta Universe taking the directorial reigns in his sequel Azrael: The Theta Girl 2. Axe impressed with effects on a budget in his first directorial effort released just earlier this year SHED. This follow-up impresses in a different way with its quick rich dialogue. Axe once again writes a cast full of interesting characters at the end of good dialogue, expanding on his growing universe, bringing back Officer Kearsey, resurrecting Bobby via his brother Morris and giving us a cast of furries. Perhaps most intriguing are a set of hitwomen mute twins who masturbate to their hostages, blow raspberries in response to questions and whose characters largely go unexplained in the best way.

The difference in filming between David Axe and The Theta Girl director Christopher Bickel is noticeable but contrast in the sequel is needed from the original and in my opinion is better for it. While The Theta Girl was a grindhouse, throwback, arthouse exploitation movie, Azrael brings it back to reality focusing on three things that work best in low budget, independent movies, dialogue, characters and story. With better production values, audio, acting and lighting Axe has proven he has the script and even special effects to make an even more entertaining film in only his sophomore feature outing.

“We’re not special. We all die and it doesn’t mean shit.”