Watching Movies - Scary Stories To Tell In The Dark 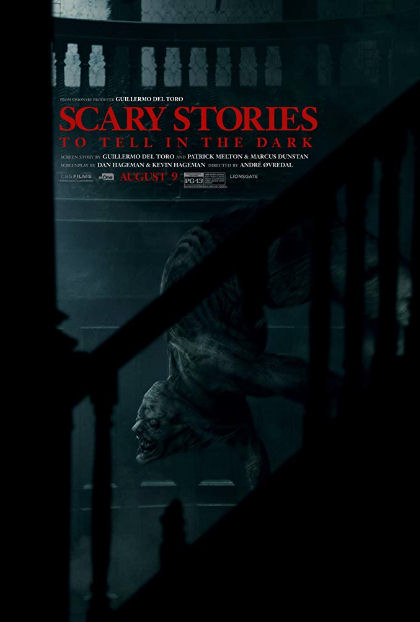 There’s a legend in the small American town Mill Valley of a little girl named Sarah Bellows (Kathleen Pollard) who was locked away by her rich family, unseen for so long she was erased from history. On Halloween night in 1968 five teenage friends Auggie (Gabriel Rush), Stella (Zoe Margaret Colletti), Chuck (Austin Zajur), there new friend Ramón (Michael Garza) and Chuck’s sister Ruth (Natalie Ganzhorn) hide in the supposedly haunted home of the Bellows family from a bully Tommy (Austin Abrams) who’s chasing them. Unlike all the kids before them who’ve broken into the Bellows family home that’s been abandoned since the 1800’s, this group of kids find the room where Sarah Bellows was locked away from the world proving that she really existed. When horror obsessed Stella takes a book of scary stories she finds that was written by Sarah Bellows, the long dead Sarah wants her book back. In Sarah’s book, the stories write themselves playing on the worst fears of those who entered her house, bringing their worst nightmares to life.

This Guillermo del Toro produced feature captures a little of del Toro’s magic on screen in the childhood 1968 setting. Del Toro co-writes the film adaptation of Alvin Schwartz 1981 novel with children’s animation writers Dan and Kevin Hageman whose credits include the popular Adam Sandler comedy Hotel Transylvania. Also writing on the film are duo Marcus Dunstan and Patrick Melton, winners of Matt Damon and Ben Affleck’s movie making reality show Project Greenlight. The duo have since gone on to write a series of films including The Collector, The Collection and to team with fellow Project Greenlight winner John Gulager on further films in the Feast series and a film from another series in Piranha 3DD. These talented writers creation fall into the hands of Norwegian filmmaker André Øvredal who directed two cult horror favorites Trollhunter and The Autopsy of Jane Doe.

A decade after the release of the 1981 Alvin Schwartz novel outraged parents throughout the United States tried to get his book banned in schools throughout the U.S. for its graphic storytelling and illustrations being readily available in school libraries. This once banned book that caused an national outcry is now a feature film. Unlike the then edgy Schwartz novel for kids, there will be no enraged parents to have the cinematic version banned in theaters or even to be given an R rating. The multi-million dollar movie adaptation from CBS Films and Lionsgate bring the visual illustrations of the book series to life but play it safe in storytelling with typical, trendy horror you’ll find in most scary movies of today in a Stranger Things, IT, Summer of ’84, setting mirroring the popular entertainment, both with its group of kids and period setting. Many childhood fans of the iconic book series may find the made for kids horror movie too tame for their adult tastes. The comparison to 2017’s hit remake IT is there and it's strong and IT was popular for a reason.

A cinematic universe is beautifully, creepily, created perfect for a kid’s bedtime story. The child actors are able to define themselves in a real world that’s full of groups of kids in period settings we’re all used to currently on television and in film. There’s an almost magic, often found in del Toro’s films that’s barely missed here, perhaps lost at the lack of his direction. Like Steven Spielberg throughout the 80’s and 90’s, any del Toro produced movie never quite lives up to the iconic filmmaker being in the director’s chair. Movies also never live up to the book. Scary Stories probably would have been better as a series instead of a film with a less than two hour runtime that feels rushed. The fears of the kids that play out when it’s their time to survive one of Sarah Bellows stories aren’t gone into depth far enough. Perhaps only frightening to a five year old age range doesn’t matter in the realm of good filmmaking and as a child who didn’t have an emotional investment in the series of novels, I thoroughly enjoyed these scary stories.