Watching Movies - Power of Grayskull: The Definitive History of He-Man and the Masters of the Universe

Review of "Power of Grayskull: The Definitive History of He-Man and the Masters of the Universe” by The Headless Critic

Power of Grayskull: The Definitive History of He-Man and the Masters of the Universe – 2019 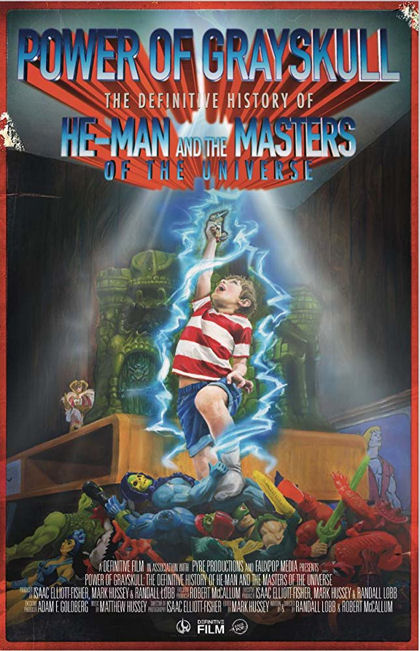 Tired of making toys for characters in television and film that would come and go with the ever changing tastes of the kids who bought them, Mattel decided to take their fate into their own hands releasing a figure of their own storyline. Modeled after a failed deal with Conan the Barbarian with a product line of Star Wars toys in mind; in 1982 Mattel released their Masters of the Universe line of toys that swept the nation throughout the end of the Reagan presidency. Today it remains one of the most collected action figure toy lines of all time not only having spawned comics, a long running television show and movies but also inspiring a generation of kids. This is the story of He-Man and the Masters of the Universe from inspiration, to creation, to decimation and how the legend continues today in this Masters of the Universe collection and in the imaginations of the kids who grew loving them.

From the “The Definitive History of” series from documentarian Randall Lobb, He-Man is documented in detail largely covering its creation and popularity in the 1980’s. Interviews with those working at Mattel who were behind the creation of the toy line, the story of getting He-Man to market, the comics that inspired the first visions of the universe and the cartoon masters that captured the minds of children across the country detail the largest product toy line of the time. This documentary is behind the scenes nostalgia that every child of the 80’s who owned a He-Man figure will absolutely love. It made me a kid again with an informative adult story.

The failed Gary Goddard, David Odell live action feature is also covered with interviews from He-Man and Skeletor themselves, Dolph Lundgren and Frank Langella. With a rumored new Master of the Universe movie coming out starring Noah Centineo as He-Man, younger fans can learn the definitive history of how he got there. For the audience that grew up watching weekly if you ever had questions about the most beloved cartoon of your childhood by the Power of Grayskull, now you have the power.