Review of "The Tangle" by The Headless Critic

Production by: Damn Warrior Production
in association with: SitkaBlu Production 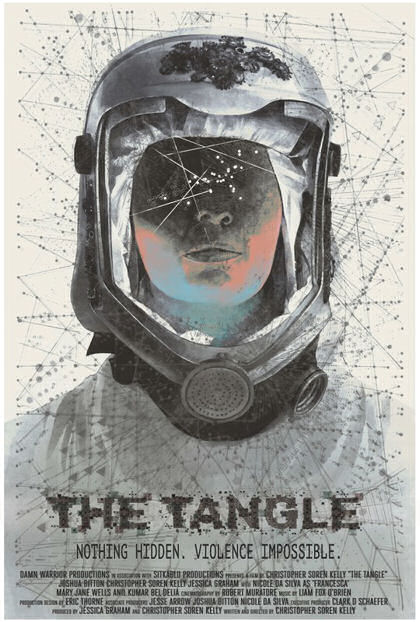 In the near future people live their lives in a perfect place, a tangle of online avatars representing themselves in an exact reality where you can look like what you want look like, live the life you want to live and be what you want to be. In the tangle life is a fantasy, a world that adjusts to your every desire. Reality doesn’t exist, relationships are a figment of your imagination, Xanadu is a proof of consciousness and death online isn’t possible, until now. Margot (Mary Jane Wells) just had her head smashed into a table over and over until her skull was crushed and she died. Detective couple Laurel (Jessica Graham) and Edward (Christopher Soren Kelly) investigate the life and death of Margot leading them to an online programmer Carter (Joshua Britton) who ratted out the ratatouille to the feds. He may be the only man who can unlock the mystery of her real life death through the tangle.

“Killing is for people and puppies.” Actor turned director Christopher Soren Kelly writes, directs and co-stars in his directorial feature debut. It’s a real love affair in an unreal world. A classic murder mystery with with a sci-fi twist. Limited on budget this slow paced, dialogue driven feature creates a multiple worlds through the tangle. In their futuristic world dialogue turns retro with sayings from the 1990’s delivered in noir form. A classic love triangle, murder mystery and interrogation with retro sayings in too cool dialogue delivered in noir form are set in a futuristic world and a sci-fi story leaves audiences trying to connect everything to a reality they can understand, get enthralled with the mystery and its ultimate untangling.