Watching Movies - Pleased to Eat You!

of "Pleased to Eat You!" by The Headless Critic 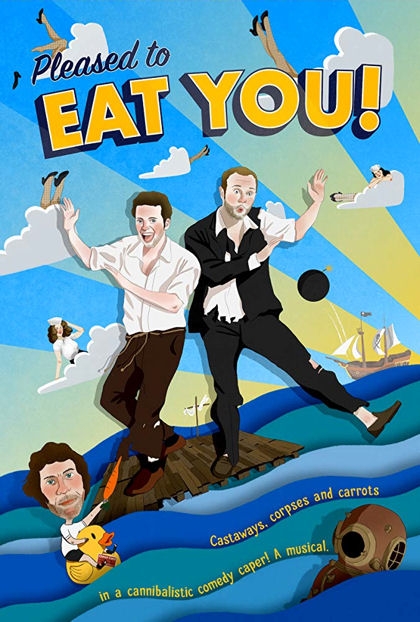 Afloat on a wooden ocean, John (Oliver Lansley), Thomas (Anthony Spargo) and Vincent (Lee Ravitz) are castaways at sea in a cannibal comedy caper of corpses and carrots. When you’re in the most dire of situations you might as well make the best of things. A little spice, a few vegetables and your friends sacrifice will at least make for a full tummy that takes good on the way down. It’s a cannibal musical of madness!

Theater at sea, retro, stylized sets look like a silent movie era film or a throwback carnival game to the early twentieth century. The Lansley and Spargo comedy duo lost at sea are the Popeye and Bluto, Laurel and Hardy, Abbott and Costello of comedy cannibalism. Their whacky Three Stooges, if one stooge was dead, comedy is done modern day fresh. Even though it was just a seven minute silent short it was a lot of fun, visually fantastic and left an impression of wanting more.