Review of "Lake Artifact" by The Headless Critic 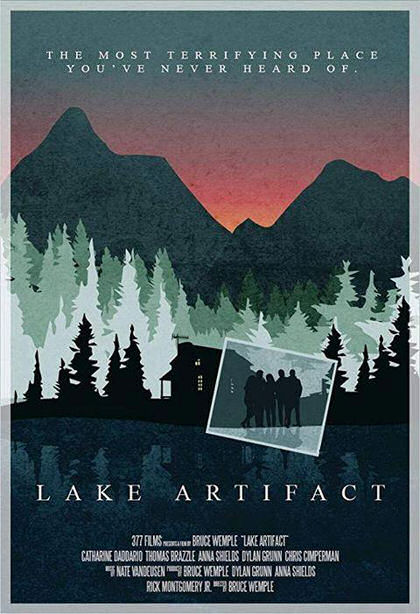 Four friends on a getaway to upstate New York spend three days to eternity in an isolated cabin by the lake. Shortly after Kip (Chris Cimperman), Megan (Anna Shields), Grace (Catharine Daddario) and Thomas (Thomas Brazzle) arrive at the cabin they meet a strange drifter Thomas (Dylan Grunn) walking alone in the woods. It seems time has no meaning on Paradox lake, or maybe it means everything here. “This place, it changes time.” When the group tries to leave they seem to go in circles unable to get out. This is only day one.

Day One-ish: It starts with a photo none of them took yet all of them are in.

Day Three-ish: All the disappearances in this area had one thing in common, whoever went in, only one came out.

Day One-ish: “It was a bloodbath.”

Altered Hours director Bruce Wemple once again tackles a time altering, science fiction, horror film in Lake Artifact. I love the concept of time in the film and Wemple gets some truly good performances from his cast. Anna Shields is visceral in her cries when her character nearly loses sanity. Thomas and Tommy gives two of my favorite performances with Dylan Grunn getting a layered role and the drifter Thomas and Thomas Brazzle going over-the-top when he loses it as Tommy. Brazzle’s performance is pure comedy in a serious sci-fi film but it somehow works.

A side story of the Old Man (John Willoughby Noble) that is captured never fully has a payoff leaving the viewer to fill in his timeline of how he got there. For an hour and a half long film I really could have done without the interviews that open the film and play throughout it. I thought as the story develops the person behind the camera interviewing would be revealed to be the survivor of this lake paradox. Even that was a bit of an unclosed or at least underutilized door. To be shot in primarily three days Lake Artifact is still an impressive film with a layering use of time travel that I really enjoyed.