Review of "The Final Ride" by The Headless Critic 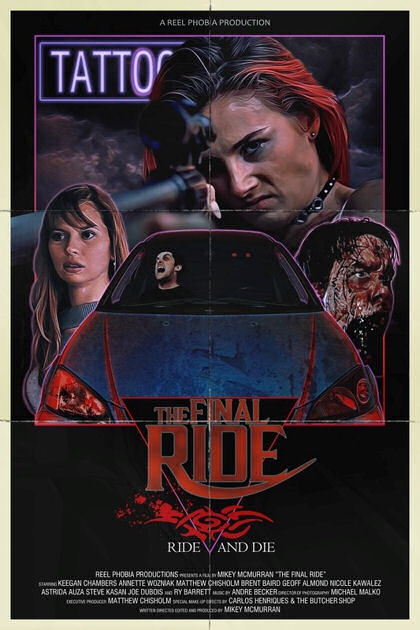 You wake up tied in the trunk of a car… Only three days ago Jean (Keegan Chambers) was giving rides to strangers for money, now she’s got her final ride for the night.

Three nights ago young couple Peter (Matthew Chisholm) and Monica (Annette Wozniak) got dropped off at their newly bought first home. They may be broke but they’re in love. In the garage, behind the hot water heater, in an shoe box Peter finds a bunch of old VHS tapes. When he finally gets to watch the tapes the exercise videos he finds aren’t the vintage pornography he thought it would be. Workout master Jimmy (Ry Barret) is a little too high energy for Peter who can’t last five minutes on a treadmill without reaching for his inhaler. Disappointed the tapes don’t have the visuals he expected Peter quickly loses interest in the tapes, until the power of Jimmy possesses him turning him into the Tony Little, Richard Simmons of his household workouts. The only way to exercise an exercise demon is through junk food. “Bonappetit asshole!” “Swallow it bitch!” But “surprise chicken thighs”, “don’t push your luck, there’s no happy endings here.”

The next day over breakfast Jean here's on the news once again about the notorious serial killer the Berryville ripper, a killer in her home town. The news plays a video of Nora Springer (Susana Borosic), who’s been missing for three weeks. Her disappearance has been linked to the Berryville Ripper. His reign of terror has just begun.

Two days ago two drunk gentleman were given a ride, dropped off at a last minute change of location. Ray Ray (Geoff Almond) convinced his drunk buddy Cody (Brent Baird) to get a spur of the moment tattoo with him. When Cody sobers up at home the next morning his girlfriend Tina (Nicole Kawalez) isn’t happy with him and his tattoo from the night before is a little bigger than he remembers. When his new tattoo starts causing him pain Cody is certain his tattoo is growing larger. What starts as a small shoulder tattoo grows into a cumbersome infection. How’s he supposed to get help for a growing tattoo? People will think he’s crazy. What’s he supposed to say? There’s a magic tattoo growing all over his body? Something isn’t right. He’s seeing things that aren’t there. His tattoo is definitely growing, it definitely hurts. Is he going crazy or is the new tattoo taking over his life?

The Final Ride tonight for for Jean is a questionable man Richard (Steve Kasan) who seems to be hitting on her. With the Berryville Ripper cutting up women where she lives Jean is paranoid the man in her back seat might be the killer that’s been alluding police. She doesn’t want to overreact but he’s definitely giving her creep vibes. In the middle of their ride when he points out that they’re on a private stretch of road with no one around she almost panics knowing something isn’t right.

Low budget all the way Secret Santa director Mike McMurran brings three of his short films together into an anthology. I love when director’s do this with their shorts. Keegan Chambers makes a fine pink haired leading lady. My favorite performance is Ry Barret as the over the top workout ghost Jimmy. With some shorts in this anthology going comedy and others being straight up horror I think I prefer the film going over-the-top.

The first ride of the night has memorable one liner dialogue and a hilarious haunting killer in Jimmy. McMorran finds the perfect line of comedy horror to have fun in. The haunted first stop of the night is my favorite short film in the anthology. The second stop is Stephen King’s Thinner for tattoos. The concept is very modern day Twilight Zone. It’s a supernatural possession of ink driving a slow decent into insanity. The Final Ride shares an important message to all women who sadly have to always be on their guard ready to avoid a predatory male in a very realistic horror situation. A trio of tales including a haunting, a possession and suspense thriller that finds the right comedy mark.