Review of "3 From Hell” by The Headless Critic 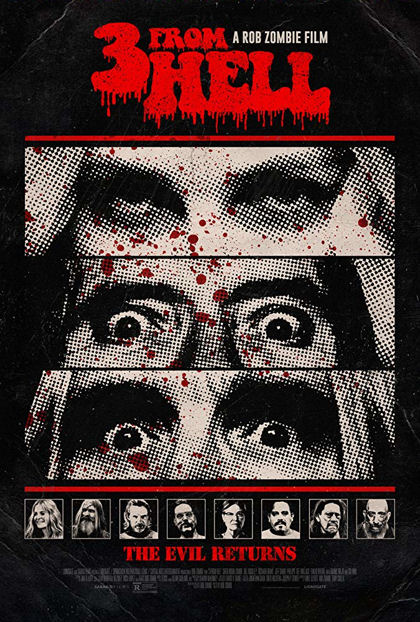 From a nightmarish house of a thousand corpses, the devil’s rejects escaped to the backroads before finally being shot down for their crimes by police. Now “The Evil Returns” as 3 From Hell rise to wreak havoc on the world once again. The remaining members of the murderous Firefly family return and are on the run this time hiding out in old Mexico. The most dangerous part of Mexico just got deadlier.

The seventh feature film solely written and directed by Rob Zombie revisits his original foray into film some fifteen years ago resurrecting the Firefly family once more. I’ll start by saying that I’m not a personal fan of any of Rob Zombie’s films with the exception of The Devil’s Rejects. I respect that he has his loyal fanbase and even though all but one of his films wasn’t for me it is the precursor to 3 from Hell. Warning there are spoilers ahead…

Like most of Rob Zombie’s films 3 From Hell has juvenile dialogue you'll find quoted throughout this review. It's definitely quotable but is nothing close to reality. Line after line is delivered excellently by wonderful actors Bill Moseley, Richard Brake and Sid Haig. With no real protagonist in the film a surreal reality is created full of characters you mostly don’t care about.

The most iconic character Rob Zombie will ever create Captain Spaulding at the hands of the talented Sid Haig is misled as being a part of this film. The “Bozo Jesus is hung out to dry for the sins of mankind.” The only clown in this movie is Clint “Greasepaint the Clown” Howard who has an excellent role but considering fans of the original two films want Captain Spaulding they will be as disappointed as Sid Haig barely makes a cameo in the opening segments. He was “Not a bad man, just another lost soul searching for forgiveness in this wicked, wicked world.”

Stepping in as the 3rd from hell is the very capable Richard Brake as Winslow Foxworth Coltrane. Brake is cast well as the brother of Otis Firefly holding his own against Bill Moseley. Richard Brake steals the film as an excellent addition to the family. While we don’t get a battle of the clowns between Capt. Spaulding (Sid Haig) and 31’s Doom-Head (Richard Brake) we do get to see Papa Corn vs 31 in a fun smaller role of Circus of the Dead’s Bill Oberst Jr. who always delivers. I hope to see him used more by Rob Zombie as I think the pairing fit nicely. His acting talents play well off wonderful actors like Richard Brake and Bill Moseley.

Like every other Rob Zombie film outside of the Devil’s Rejects which devoted some sense of time and realism into protagonists there once again aren’t any here. Unless you’re pulling for the Firefly family Pancho Moler is the only redeemable character given any screen time to care about. If you are on team Firefly, Otis (Bill Moseley) who was once “Satan’s destroyer, the eternal flame of salvation burning through your life, your liberty and pursuit of fucking happiness.” in House of 1000 Corpses is given another amazing transformation by Bill Moseley becoming a protagonist when we don’t want to see him as one.

Zombie continues to use his nearly fifty year old wife Sheri Moon Zombie in twenty-five year old bimbo roles. Sheri Moon gives her most over-the-top performances yet. She is Baby Firefly from the original two films if Baby who’s already crazy went crazy. To her fans I assume this is a good thing, to me she is what I can’t stand in most of her husband’s films.

My hopes were high with the follow up to The Devil’s Rejects which is not only the sole Rob Zombie film that I like but is also one of my favorite horror movies. Like all of Zombie’s films it’s stylized with excellent visuals, quotable dialogue and excellent performances that’s simply lost to writing and direction.