Watching Movies - Ready or Not

Review of "Ready or Not” by The Headless Critic 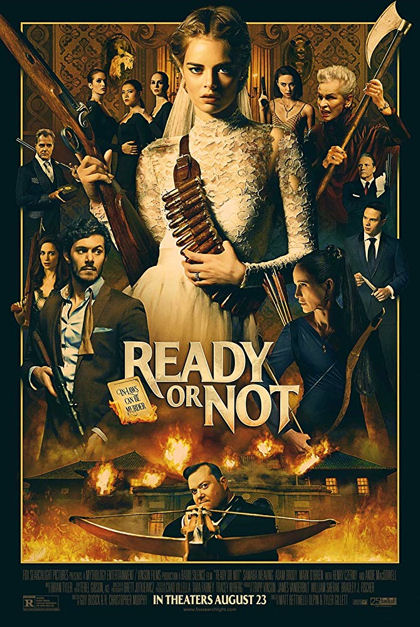 She’s only known him for a year and a half but Grace (Samara Weaving) has never been more certain of anything in her life as she is that she wants to marry the love of her life Alex Le Domas (Mark O’Brien). They are in love. The prodigal son to the Le Domas gaming empire, Grace loves her fiancé but marrying into the family fortune is certainly a perk. From playing cards to owning four sports teams the Le Domas family made their fortune on games. On their wedding day Grace meets most of the eccentric, rich family for the first time.

Her father-in-law to be Tony (Henry Czerny) wants his somewhat estranged son Alex to be closer to the rest of the family again. Becky (Andie McDowell) sees a lot of herself in her son’s bride to be. Her brother-in-law Daniel (Adam Brody) is the disappointment to the family but also the one Alex is closest with and Grace thinks she’ll be close to him too. Aunt Helene (Nicky Guadagni) is quite frankly just scary but no family is perfect and a foster child like Grace has never really had a family of her own.

On her wedding night at the Le Domas estate, Grace learns the tradition that anyone new entering the family must play a game with the rest of the clan at midnight. A family tradition written in blood has the newest member of the Le Domas family playing a deadly game of hide and seek. Choose your weapon and hide for your life. One, two, three, four, five, six, seven, eight, nine, ten, ready or not here they come. “The Game Begins”.

From Matt Bettinelli-Olpin and Tyler Gillett the anthology directors of V/H/S and Southbound, comes a satanic game of horror hide and seek. With independent filmmakers, fans and critics clamoring for more movies that aren’t either made on a micro-budget or for more than ten million, comes that middle funded film that hits all the right marks of excellence. Ready or Not is a film that really reaches its full potential.

Made for a reported six million dollars it looks like a much bigger budget feature. The Guy Busick, Ryan Murphy script is well thought out mixing the murderous intentions of Clue with the hunt of Surviving the Game. A talented cast combines up and coming stars like Samara Weaving, with veteran names like Andie McDowell and hidden gems like Nicky Guadagni. Set in a beautiful mansion with practical effects and a lot of gore everything is done right. Even the fire which had to be CGI in such a beautiful estate looks amazing. If it’s animated, it's the best animated fire I’ve ever seen in film. They even find the right mix of comedy and horror which is something that’s really hard to do.