Review of "Bad CGI Sharks” by The Headless Critic 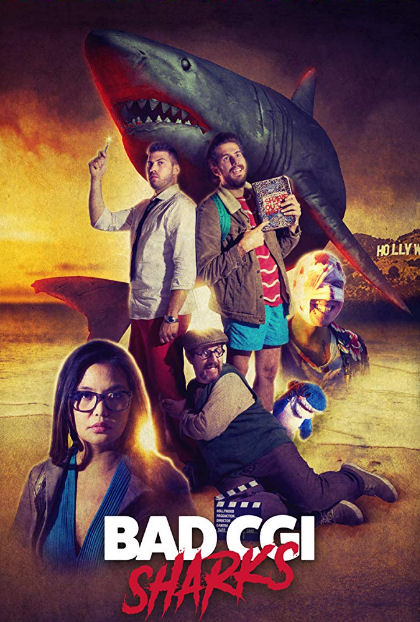 Oh, I thought I heard someone. Hello, I see you find my secret underground magical review of Bad CGI Sharks, hidden deep within the pages of WithoutYourHead.com. I’ll get to my introduction in one moment but first my review…

Our story begins a long, long time ago in a small village in New Jersey. Jason (Jason Ellsworth) and Matthew (Matthew Ellsworth) were inseparable. The two brothers and best chums spent every second of their lives together playing, watching monster movies and making their own. They wanted to grow up and make the coolest movie ever about their favorite real life monster, the shark. Aquatic creature based terror was a great idea in 1978… Now their script only reinforces age old stereotypes about sharks. When their father separated the two brothers at a young age, that dream died, at least for one of them. This is an emotional story about two brothers trying to reconnect their dreams and sharks, sharks, lots of sharks!

Well you like my review? Fine, read some more before you decide. There’s a whole bunch of shit in this bag.

Oh my God, a bloodthirsty shark, we are so doomed! Jason and Matthew Ellsworth's script for the self-aware Bad CGI Sharks is certainly no epic love story like, I Was Better Off With My Vibrator or Memoirs of a Serial Cannibal Sex Addict but it pays attention to small details of putting douche on the wall of a monthly bloodbath. Two estranged brothers who wrote a cool shark movie with no substance, Sharks Out of Water are brought together when the script they wrote as kids comes to life as bad CGI sharks. With more money this film could’ve been called Sharks. They did not have more money. There is a shark on land, well it’s kind of floating above land like a blimp. This thing looks like a bad CGI movie creature.

In a Hollywood world of women waiting to be eaten, Bad CGI Sharks will take a bite. This self-aware CGI terror adds a new layer of terrible to the sharksploitation sub-genre of horror, turning terrible into comedy full of blood and guts and butts. This is the dawn of the shark revolution but its two stars will be damned if they’re going to let some vindictive digital fish kill them off. When reality of making a movie gets this surreal they become the authority. It’s the battle of the ages as Bad CGI Sharks take on the lowly humans who created them.

Oh my closing monologue... Wasn’t reading my review thrilling? I made that! Who am I? I am a dispenser of magic, I bring reviews to those who need it. I don’t make films, I make reviews so you know to watch them. Bad CGI Sharks makes due with what they have writing bad CGI sharks into their movie. They also write some excellent dialogue. Why my review consists almost entirely of dialogue I took from the film. Before I go always remember a movie is not about the ending it’s about the feeling it leaves you with. Bad CGI Sharks is bad but through witty dialogue, the ability to have fun with itself, the Ellsworth brothers performances and passion behind the project, it left me feeling chummy.