Watching Movies - Once Upon A Time in Deadwood 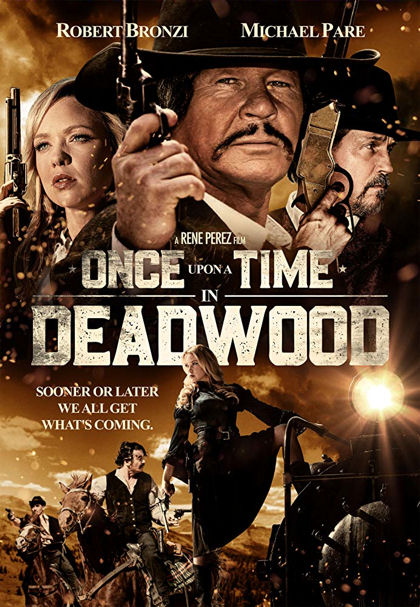 Once upon a time in the lawless town of Deadwood the beautiful Abigale (Lauren Compton) is brought forcibly into town as a prisoner of a man known as Swearengen (Michael Paré) who intends to make her a hostess of his local saloon. Hostess is a polite way of saying prostitution. With her sister kidnapped by the powerful Swearengen Ursula (Karin Brauns) turns to the legendary gunslinger The Colonel (Robert Bronzi) to save her. To make sure he helps her Ursula slips The Colonel a slow-acting poison that will kill him in three days if he doesn’t save her sister and get the antidote from her.

We here at Without Your Head Horror and Beyond specialize in horror but representing the beyond department is Robert Bronzi and his uncanny likeness to unique looking action star Charles Bronson who passed away in 2003 at the age of 81. I may be a headless horror critic but I’ve had an affinity for westerns since childhood. I’m just as hard on unrealistic westerns as I am bad CGI which are two of my biggest pet peeves in cinema. On a budget Rene Perez does not hit every mark of a realistic time period western. Much of the gunfire is post animated sparks I tend to hate. The actresses are hired for their looks rather than their realism to the time period. Where I tend to tear these things apart in most film, I just didn’t care here.

Robert Bronzi has captured me. Bronzi may be America's last B-Movie action star. The Hungarian born actor is comparable to the early day films of Arnold Schwarzenegger or Charles Bronson himself. Just like the action stars you used to go see in whatever new film they had coming out, you want to see the star in a different role more than you care about the movie itself. Bronzi in a western, Bronzi in a cop film, Bronzi in prison, when I hear that Charles Bronson look-a-like Robert Bronzi is in a film, I’m interested.

Like in previous Rene Perez movies we pick up in what seems like mid-story of a larger narrative perhaps only told in the director’s mind. In the Hungarian actor's third American film, all directed by Rene Perez, Bronzi finally has a speaking role that isn’t dubbed. It’s as imperfect as the films of the 1970’s that we loved for their gritty imperfections. While Hollywood is abuzz about artfully done and masterfully acted films like Midsommar that I just couldn’t care about, Robert Bronzi makes an imperfect western I just enjoyed watching him in so much.