Review of "Clownado” by The Headless Critic 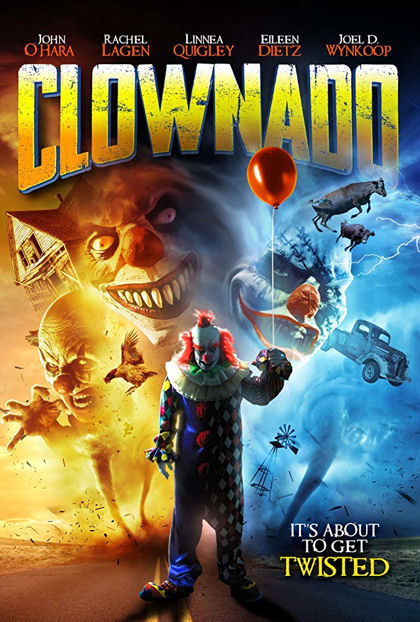 There’s a storm coming and at the eye of tornado are a bunch of murderous circus clowns. How did they get there? “It’s a long story honey and this ain’t the time or place. All you need to know is that they are some evil motherfuckers who do some sick, sadistic shit to people.” A ragtag group of diners that include a truck driver (Bobby Westrick), an Elvis impersonator (Antwoine Steele), a stripper (Dilynn Fawn Harvey), a teen runaway (Sierra Stodden), the restaurant owner (Eileen Dietz) and Flo (Sheila Brandon Allen) get trapped in well a diner as murderous circus clowns descend on them from a tornado outside.

It’s Diners vs Tornado Clowns in a night of little laughs and horrific gore. Movie making machine Todd Sheets’ latest directorial effort is Killer Klowns from Outer Space meets From Dusk till Dawn that aspires to a Quentin Tarantino level score and dialogue. There’s no calm before this storm. Protagonists don’t enter until a half an hour into the film. Instead modern day clowns with stereotypical 1930’s gangster accents are cast into a tornado. None of the clowns seem like circus clowns. These face painted horror fans seem more likely to be found at a gathering of Juggalos.

With a name like Clownado you expect to have ridiculous over the top comedy in a bad CGI film. Instead Todd Sheets gives us practical gore to the extreme. Close-ups of knives going into bodies will make you cringe, going for shock value on the level of a snuff film. The title alone is bound to get attention. I typically don’t like low budget CGI films. Even if the title suggests it, this isn’t one of those films. Clownado is more suited for gorehounds than those looking for the next CGI Syfy movie of the week. Sadly I also don’t typically like gore films. I enjoyed Clownado more than I thought I would for a film of such a title but it still wasn’t made for me. It’s a lightbulb that’s gone out, it’s milk that’s gone sour but at least it's 2% and not watered down skim.