Review of "Replace” by The Headless Critic 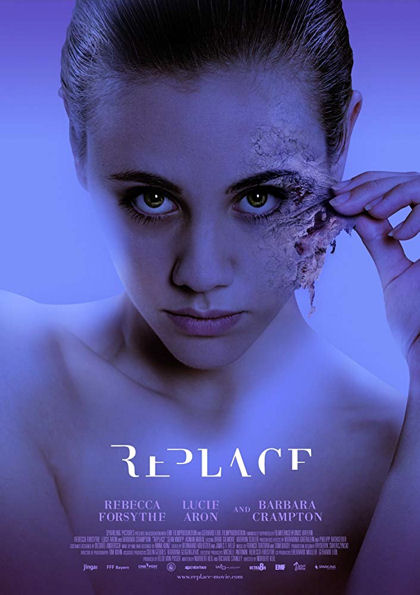 “I never want to grow old.”

“At first it was just a small spot, a bit of dried skin. Then is spread and it kept spreading.” The young and beautiful Kira (Rebecca Forsythe) is helpless as she watches the outer layer of her skin age and die at an extreme rate. Afflicted with a strange disease Kira’s skin begins aging beyond her years. With her body crumbling away into dust she finds she can replace her own skin with that of other people. How can she live with herself if she takes the skin of living people though? She certainly can’t live with herself if she crumbles away into dust and dies. Humanity is the cost for self-preservation as young Kira is forced to choose between her own life and the unwilling sacrifice of others to save herself.

Richard Stanley co-writes an excellent, layered script of a moral dilemma with Germany’s Norbert Keil directing. Right and wrong, living and survival gives a conscious to this sci-fi horror thriller that holds little redemption. Replace, replaces Christopher Nolan’s 2000 breakout hit feature Memento as a modern day mystery of finding ones true self. What would you do to save your own life?

“I cannot watch my body grow old, lose control of it, watch it crumble before my eyes.”

Beautifully shot, Keil directs a slow paced unveiling of what’s behind the dried out dead skin of Kira Mabon. Rebecca Forsythe reveals her many layers in an excellent lead role. Veteran horror icon Barbara Crampton continues to impress in film after film as of late this time playing Kira’s doctor Rafaela Crober. Certain audiences may find this replacement moving slower than they’re used to but I was surprised by how well this adhered so quickly to my cinematic tastes. The concept and script are the strongest part fulfilled by an equally strong performance from Rebecca Forsythe.