Review of "The Furies” by The Headless Critic

Production by: The Film Distillery
in association with: Odin’s Eye Entertainment
Distribution by: Shudder 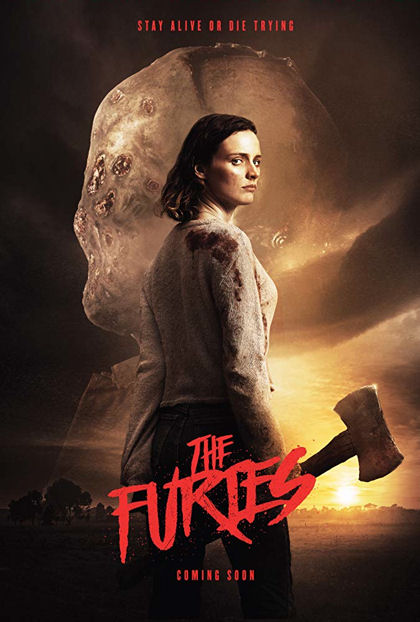 Beauties have awoken in a black box, in the middle of nowhere, in the middle of a deadly game. The last thing Beauty 6, Kayla (Airlie Dodds) remembers she was having a fight with the person she’s closest to Maddie (Ebony Vagulans). Now she’s waking up screaming locked in a black box. She is not alone. There are other beauties in these woods but there’s no sign of Maddie. They are not alone. There are men in masks hunting these beauties. “Stay Alive or Die Trying”. The men are brutal, they want death, they are beasts.

Airlie Dodds takes charge leading a cast of beauties both in character and performance. Beauty Sally (Harriet Davies) impresses with her realistic terror and visceral screams standing out as a scream queen in the making. Down this rabbit hole of killers Alice (Kaitlyn Boyé) fights back in the film’s most empowering role from perhaps it’s smallest character. Even the cast of behind the mask killers Rotface and Pigface (Steve Morris), Babyface and Owly (Leon Stripp) and Skincrow (Ben Troyer) are killers who are not too big to be believable with varying sizes and original and varying looks. The only performance of the film I didn’t care for is Beauty Rose (Linda Ngo) who’s lost somewhere between mastermind, child and intellectual disability that’s just too confusing with a childlike dialect that’s beyond annoying.

Australia’s Tony D’Aquino directs his first feature film, a simple story of beauty against beast without explanation that grows into a somewhat original if not complicated concept that’s a combination of The Cube and Surviving the Game in a Friday the 13th setting. It’s beauty versus beast in a deadly game of survival. This is no love story. You will find no fuzzy fetishes here. What you will find is the best face removal scene I’ve ever watched in a horror movie and something we always approve of here at Without Your Head, decapitations! This is a gore driven, fun slasher movie done right. With practical effects and minimal CGI, Tony D’Aquino spills blood all over the Australian Outback. It’s gorrific.