Review of "Don’t Look” by The Headless Critic 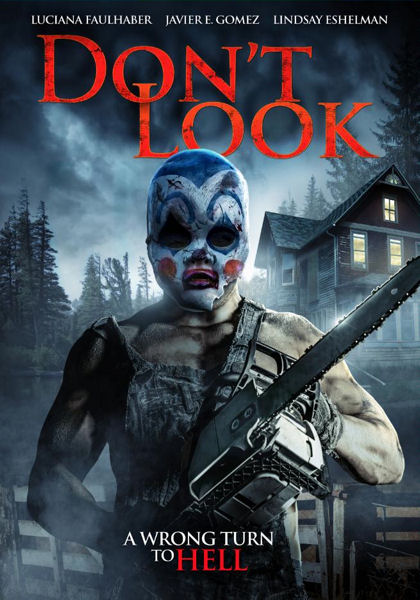 The place is incredible, an isolated vacation getaway from New York City. For Lorena (Luciana Faulhaber), Ted (Jeff Berg), Alex (Curtis K Case), Nicole (Lindsay Eshelman) and Sebastian (Javier E. Gómez) it may also be a permanent vacation from life. Five New York yuppies head to a rural countryside vacation where none of them get phone signal and all of them are in danger of dying by these laid back country folk. On day one the group run into oversexed, backwoods couple Kelley (Jarrod Robbins) and Sherri Baby (Hailey Heisick). By night one they begin to die.

When a new director wants to make a movie they think, let’s make a slasher movie, they’re easy and they always sell. Don’t Look is a perfect example that you can’t put a mask on a killer and call it a movie. Playing on every cliché in slasher film history, actress turned first time director and the star of Don’t Look Luciana Faulhaber makes a horror movie. To Faulhaber’s credit the gore in her first feature is practical; fire however goes up in an awful burst of CGI flames. Cool kills and a killer mask are great to have in a horror film but a likable protagonist is what makes an audience care.

A copycat killer of 80’s slasher films, Don’t Look is a watered down retelling that we’ve heard better versions of before. With slasher films not typically being the best source of likable protagonists, sacrificing their characters in the name of body counts, the only standout performance is hillbilly Kelley. Jarrod Robbins impresses in his portrayal making the most of an unfortunate stereotypical, racist character. Kelley’s woman Sherri Baby must have been intended to copy Sheri Moon Zombie’s Baby Firefly because the character is so over-the-top just like Sheri Moon’s performance in her husbands movies it’s just not enjoyable. Javier E. Gómez is equally unrealistic in his comic relief character. The true comedy in Don’t Look may be Curtis K Case walking around the entire movie looking for cell signal. After awhile it just gets old, just like watching this same movie since the 1980’s only executed much better many times over for the last forty years.