Review of "Candy Corn” by The Headless Critic 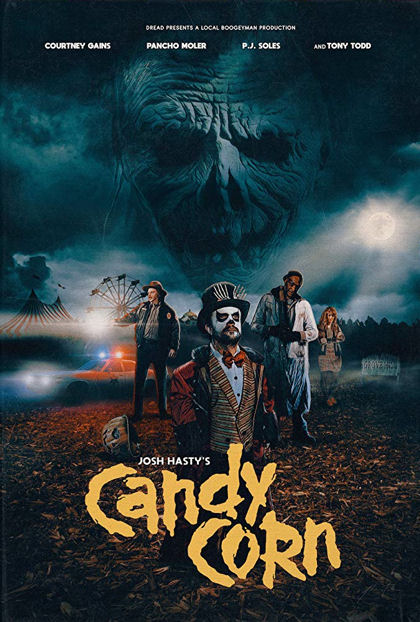 Unwilling to watch such an injustice of a fellow freak, ringmaster Dr. Death (Pancho Moler) summons a mentally unstable resurrection. “This year there’s a new Halloween tradition.” Grove Hill is going to have a hell of a Halloween as the resurrected zombie of Jacob Atkins takes revenge on the small town that wronged him. When the town creates a witch hunt coming for the freaks, the freaks are ready and they’re going to give them what they came for. It’s Small Town America versus Carnival Freaks.

If life were as sweet as Candy Corn we wouldn’t have anything more complicated than its three simple colors. Josh Hasty’s Candy Corn is a three colored mixture of an excellent cast, fun horror movie kills and a slow pace that doesn’t seem to fully utilize it all. Show me a movie about a cast of carnies facing off against small town America starring Pancho Moler, Courtney Gains, P.J. Soles, Sky Elobar and Tony Todd and I’m buying my ticket! The freak show inside doesn’t quite live up to the banner advertisement that drew me in.

It is great seeing Courtney Gains and Pancho Moler in starring roles as well as Greasy Strangler cult favorite Sky Elobar. Horror icons P.J. Soles and Tony Todd also have smaller parts. Perhaps due to budget Hasty keeps Candy Corn reeled in instead of going over-the-top leaving his cast, his carnies, the kills and fun a tasty looking treat that just doesn’t stand out enough. Kind of like candy corn.