Review of "Holiday Hell” by The Headless Critic 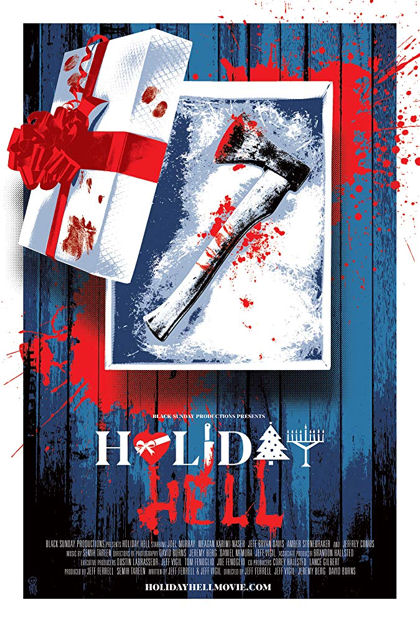 Finding the perfect Christmas gift can be tricky. Looking for the right Christmas present for her twin sister Ophelia (Meagan Karimi-Naser) has brought Amelia (Meagan Karimi-Naser) into her last stop Christmas shop, the Nevertold Casket Co. The Shopkeeper (Jeffrey Combs) has many things including human skulls, Ouija boards, coffins, caskets, taxidermy and many other singular items. Everything, all of the objects in this shop have a story behind them. If they don’t have a story he won’t sell them. Which is why he calls his shop Nevertold, all of the objects in the shop have a story that’s never been told.

Dollface:
My sister could kick your sister’s ass. Eight high school “friends” are meeting up at a murder house that’s been sitting empty for years. Years ago the mother of the house went psycho and chopped up her husband and her son. The house technically still belongs to the couple’s daughters but they’re still locked up, so it’s been sitting there empty with no power or running water. A perfect, isolated place for crazy kids to make use of it, also a perfect place to die.
Directed by: Jeff Vigil

The Hand that Rocks the Dreidel:
The last candle on the chanukiah is lit, and Kevin (Forrest Campbell) just received his last gift of Chanukah, a one of a kind doll made by a Rabbi a very long time ago. With his parents Stan (Tom Stewart) and Janet (Lisa Coronado) leaving on the redeye tonight Kevin will have his new doll to keep him company while his babysitter Lisa (Amber Stonebraker) watches him over the weekend. When trouble finds Kevin, help will arrive, he reads the words and it will arise.
Directed by: Jeff Ferrell

Christmas Carnage:
Loyal company employee Chris (Joel Murray) played Santa at last year’s company Christmas party. He had a little too much to drink and things kind of got out of hand. 365 days dry at the insistence of his wife Susan (Alisa Marshall), Chris has quit drinking, quit smoking and he still got beat out for a promotion at work by Tom (Jeff Bryan Davis) and his wife isn’t even having sex with him. You have to show them you’re not their bitch and stand up for yourself or they’ll run all over you. On the eve of this year’s office Christmas party it’s time to suit up again. There’s only so much a man can take. We don’t want another incident like last year… He stole his job, had his wife, he feels like he’s getting fucked and without any lube. “That isn’t appropriate office behavior.” You nail his wife, he’ll nail you.
Directed by: David Burns

Room to Let:
After her mother’s passing Anna (McKenna Ralston) just wants to get as far away from home as she can. She’s made living arrangements to sublet a room in a new town from Vini (Lisa Carswell) and her husband Robert (Jeffrey Arrington). Not everyone is as nice as they are back home. A young college age girl must be careful who she trusts, the solstice is upon us.
Directed by: Jeremy Berg

A mysterious shopkeeper narrates four horror tales, each set during a different holiday. Four directors bring their unique talents to this holiday anthology. Though the concept is more like 2016’s Holidays, I’ve not been reminded of Tales from the Hood this much since the sequel last year. The Jeff Ferrell directed The Hand that Rocks the Dreidel even reminds me of a Jewish doll version of KKK Comeuppance set to a babysitter horror theme. My personal favorite with some fun quotable dialogue is Christmas Carnage by David Burns, which with Joel Murray, Jeff Bryan Davis and Alisa Marshall may also have the better-rounded cast.

An anthology film brings four shorts from four directors together with a nice wrap-around story starring horror icon Jeffrey Combs. What more could you ask for? Well it’s definitely done on a budget that includes enough money for an enjoyably comical fake hand getting severed straight from the Halloween store. I enjoyed Holiday Hell with highlights for me coming in the performance of Jeffrey Combs who shows he hasn’t lost a step since Re-Animator, he's complimented well by the performance of Meagan Karimi-Naser.