Review of "The Field” by The Headless Critic

Production by: Found the Ribbon Films
Distribution by: Gravitas Ventures 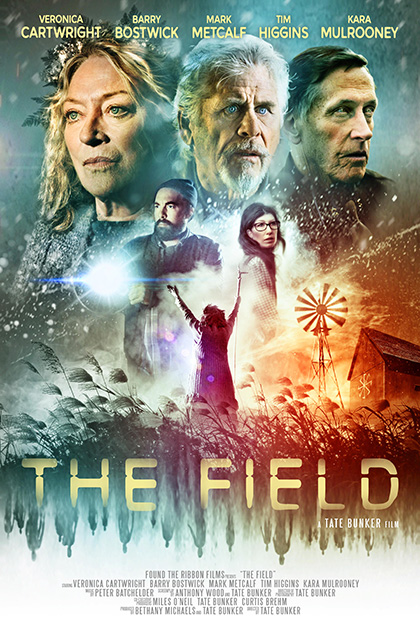 On October 13th, 1961 Edith Millard (Bella Wholey Ortiz) disappeared outside her home while frolicking in the field with her boyfriend Roy (Josh Pererson). The entire town of Manitowoc showed up looking for her thinking she’d fallen down a well. After days of searching and being unable to find her, she was pronounced dead. Seven years later Edith Millard (Veronica Cartwright) was found naked, walking down Main Street in the middle of the night in a trance. She could barely speak. Rumors were that her parents or someone in town had locked her away doing God knows what to her for all those years. It changed the town forever.

Today a Chicago Chef Ben (Tim Higgins) and his wife, interior decorator Lydia (Kara Mulrooney) finally moved out of the city into a long empty farmhouse in the small town of Manitowoc. An amateur photographer Ben immediately begins taking photos of their new picturesque property. “There’s something odd out there in that field.” Outside the house Ben sees the shadows of men in the photographs he takes of the farmland. Inside the house Lydia finds old pictures of what once went on at the property they now own. When townspeople like George (Barry Bostwick) and Sheriff Roy (Mark Metcalf) that are too scarred by the event that took place on that farm almost fifty years ago refuse to talk about what’s happening on their land, Ben and Lydia are left to develop what’s really happening at their new home all by themselves, one frame at a time.

Director and co-writer Tate Bunker brings his cinematographer background to his third feature film. Beautifully shot farm and countryside make a picturesque film about pictures. An excellent cast of talented stars bring name value to this little indie feature. Veronica Cartwright really impresses in her performance of a little girl still lost as a woman. Barry Bostwick has hardly aged since being Mayor of Spin City, still handsome enough to be a leading man. All around good performances from the cast draw you into a compelling mystery. I love the opening, the entire cast, the look and taking pictures of the past. As a horror critic who may be hardened, the history of what happened on the farm was portrayed too lightly for me. I also could have done without the CGI lightning. While I enjoyed my frolic in Tate Bunker’s Field my only real complaint of substance was an ending that was too abrupt, a little simple and like the pictures of the past exposed too light.