Watching Movies - In The Tall Grass

Review of "In The Tall Grass” by The Headless Critic 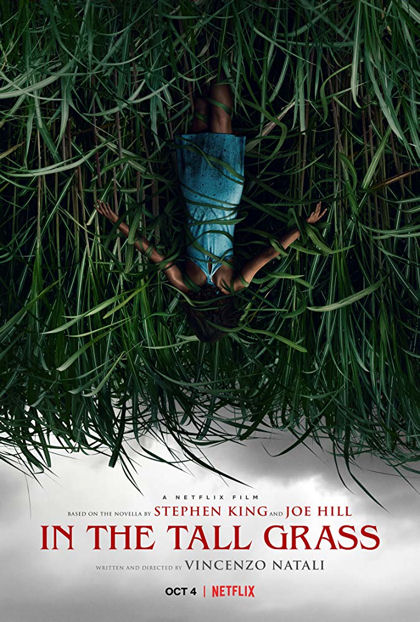 Two siblings Becky (Laysla De Oliveira) and Cal DeMuth (Avery Whitted) stop along an isolated road somewhere in the middle of Kansas while heading cross country to San Diego. Six months pregnant, Becky’s morning sickness expels itself as soon as the car doors open. Off the roadside the grass grows taller than the tallest man. From just beyond the edge of that grass, out of sight in the tall grass, a young boy Tobin (Will Buie Jr.) cries for help. The brother and sister step into the tall field of grass just off the roadside in the plains of Kansas to help guide the little, lost boy back to the road. Once inside getting back out of the tall grass isn’t as easy as it seems. Something is not right in here.

The Conjuring’s Patrick Wilson co-stars in a Stephen King, Joe Hill dually written novel brought to film by cult favorite Cube director Vincenzo Natali, what could go wrong? Good performances all around by the cast with young Will Buie Jr. standing out as one of the best, Vincenzo Natali is able to capture a sense of dread that’s a must for almost any Stephen King adapted movie. Whether it was CGI or a perfect real world setting I couldn’t tell the difference, the tall grass looks excellent with nice visuals, sets and cinematography. Everything was right until almost everything went wrong.

This collaboration with his son Joe Hill starts off powerfully. The beginning of the film version is eerily similar to another King story adapted to film Children of the Corn. Eventually a group of survivors find each other pitted up against some kind of unknown evil. A similar gathering you’ll find in the vast majority of King’s works. In a familiar plot, tension builds up surrounding the mystery of what’s going on and the dynamic of the relationships between characters.

A lot of Stephen King's work spin off in too many directions for a film. In the tall grass there’s the mysterious grass, a more mysterious rock, a time loop, dead bodies rising from the ground and your token King character that turns evil against the others. At least there wasn’t an annoying religious doomsday person preaching the end of times in this field like there have been in so many of his other stories. A great build hits a few cliché’s and doesn’t quite give us the payoff we want. Whatever is in the tall grass fails to capture the magic of recent King film adaptations, feeling more like one of the annoying mini-series of old that never quite caught on.