Review of "Haunt” by The Headless Critic 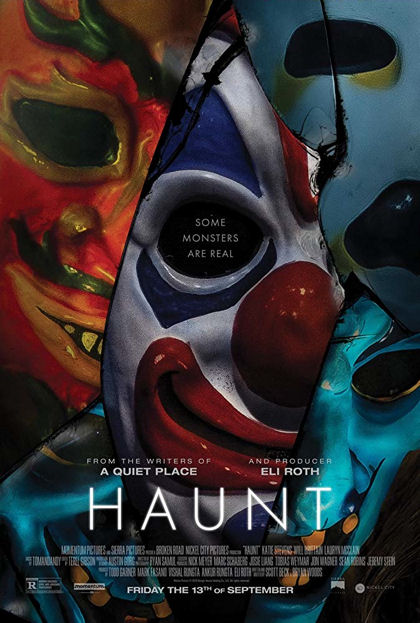 It’s Halloween, weird is good. While partying at a club on Halloween night four friends Bailey (Lauryn Alisa McClain), Harper (Katie Stevens), Angela (Shazi Raja) and Mallory (Schuyler Helford) hook up with a couple of boys Nathan (Will Brittain) and Evan (Andrew Caldwell) who convince them the end the night going to a haunted attraction. There are your family friendly haunted houses then there are extreme haunts. This group just stumbled across the most extreme of extreme haunts.

After signing a waiver to enter, A Ghost (Chaney Morrow), a Clown (Justin Marxen), a Witch (Terri Partyka), a Vampire (Justin Rose), a Zombie (Schuyler White) and the Devil (Damian Maffei) terrorize those who enter. “Some monsters are real.” Is this the extreme haunted house that was promised or is the authenticity of what’s happening in this haunt all too real? “Trick or Die.”

“What are you craving this Halloween?” Last year we were treated to two entertaining Fests bringing blood and hell from the setting of a haunted attraction. The writers of my favorite horror movie of that year A Quiet Place Scott Beck and Bryan Woods write and co-direct “One Last Scare”, in the latest haunted house horror film with producer Eli Roth. This Haunt was filmed in my home state of Kentucky and I must unbiasedly say they do it better. They create a Saw worthy maze of haunted houses to make your way through. The blood is serious and the hell they create is far worse than any haunt before them.

“Such a pretty mask, why don’t we take it off and see who you really are.” So many modern day slasher movies put masks on their killers without reason besides nostalgia for the 1980’s. Haunt picks better masks putting them on their slashers for an excellent reason, Halloween. What’s better is they’re even scarier when their masks are taken off. Don’t let this one slip under your radar. It’s the best haunted attraction movie I’ve ever seen and my favorite slasher movie of the year. Everything’s practical and done well. Thought is put into their characters and their killers. What’s under your mask?

Available October 24th, 2019 only on Shudder