Review of "Portal by The Headless Critic 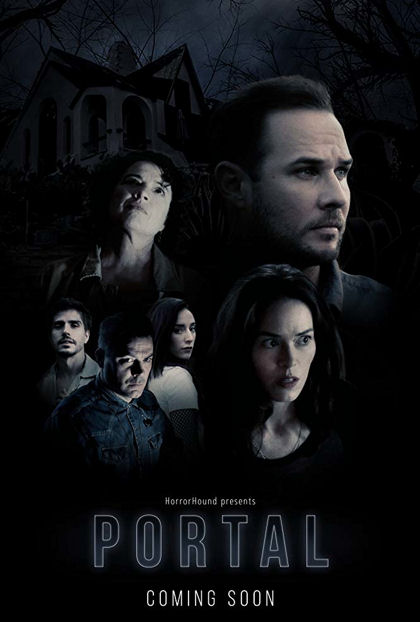 Ghost Seekers is the last legitimate ghost hunting show on television. Show leader and star Steven (Ryan Merriman) is emphatic that his show doesn’t cut corners or fake paranormal evidence. Hard evidence is exactly that, hard to find. After years on television ratings are also hard to find. In a last ditched effort to keep from augmenting their show and stay on the air, Steven bribes the Location Scout (Travis DesLaurier) from a competitor show Ghost Trackers to help the right house find them. The most haunted location their competitors have on file, the Dalva house, where at least three people were murdered is the perfect paranormal place for their season finale.

In the middle of nowhere, forgotten by time lies a small property simply known as the Dalva house. It has been steeped in mystery under a dark cloud of death and horror for nearly two generations. It’s victims, a father, a mother and a daughter. Only the youngest daughter escaped alive, whereabouts unknown. They set up their command center inside. Their audio-visual tech Mason (Myk Watford) will be monitoring all the static camcorder evidence that they get tonight. They also have a still photographer Jen (Najarra Townsend), she’ll be taking photos inside and out, looking for any information on spirit orbs or aberrations signs. They also have their producer Cris (Jamie Tisdale) who’s deployed rem pods around the house. Tonight the Ghost Seeker crew will be the first paranormal team to ever investigate it’s unknown secrets. Who knows what they might find or what might find them.

When the paranormal activity they sought isn’t as prevalent as they need for the show to get ratings, Steven performs a risky ritual that may end up making this more than just finale for the show, it may be a finale for their lives.

Co-writer Dean Alioto directs his first feature film in nearly a decade for popular horror convention HorrorHound in their first attempt at big screen success. This ghost hunting tour starts off as legitimately entertaining as a realistic paranormal investigation show at its peak. When all hell breaks loose in this haunted house the cast holds it together going from paranormal investigation crew to horror movie victims. Jamie Tisdale stands out in her performance. Show frontrunner Ryan Merriman impresses most as a convincing paranormal investigator while Myk Watford adds much needed character to the group.

Then at fifty-two minutes in, enter Fiona (Heather Langenkamp) and Douglas (Gregory Zaragoza) and ruin it all. The history of what happened in the Dalva house is too neatly wrapped up at the entrance of the third act characters. Dialogue becomes unrealistic and characters lose realism as the ending drags this movie into a budget CGI portal to who knows where.