A Faux Review of "The Fanatic” by The Headless Critic 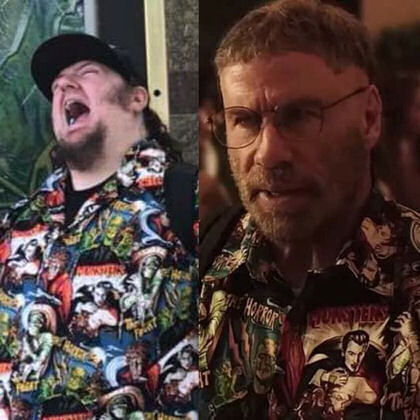 2019’s The Fanatic is musician Fred Durst third foray into feature filmmaking, directing and co-writing the film himself in a story based on a true stalking incident the celebrity experienced. In the film Hunter Dunbar (Devon Sawa) is an action movie star who becomes the obsession of film fan Moose (John Travolta). Moose is more than a film fan displaying a social awkwardness and spectrum or intellectual disorder. Moose always stands out with a unique look headlined by horror t-shirts and movie memorabilia. He doesn’t drive, taking the bus or his scooter everywhere. Moose only has one friend in the world Leah (Ana Golja), a dark paparazzi photographer who has an unlikely friendship with the special needs man, bonding over film.

"You’re a fan, without you I’m nothing.” – Hunter Dunbar

An hour outside of Boston, Massachusetts along the coast of Cape Code in the small town of Sandwich, a lifelong horror fan built an empire of interviews with the celebrities he loves, all in the name of being a fan. He doesn’t like the term fan though, it’s too close to fanatic. He refuses to call it a job, he calls it his life. Others might call it an obsession. Neal Jones is an eccentric personality, a collector of movie memorabilia especially horror t-shirts, a supporter of independent music who’s admittedly had to overcome social awkwardness when he started WithoutYourHead.com over a decade ago. Through Without Your Head he was able to find a connection to the business he loves, but is the story that simple?

Limp Bizkit rose to stardom after the release of their first studio album in 1997 which went platinum. Follow-up albums in 1999 and 2000 sold fifteen million copies rocketing the band to superstardom with a name recognizable in any American home. In 1999 amidst their greatest success the band played the rooftop of a building in Boston, Massachusetts drawing the attention of thousands. It’s possible this is where Neal Jones obsession begins. Just over a year after the Boston rooftop session, after the release of their third album, Limp Bizkit all but disappeared from making new music for the next three years. Their fourth album in 2003 was met to less success and it wouldn’t be until 2011 that the band would release their fifth and final album to date. Is it possible that Lip Bizkit frontman Fred Durst lost his heart for the business?

“You have to troll the troll.” – Neal Jones

Those of us who know him know the similarities. Moose wears a “one of a kind” shirt that another man Neal Jones already owns in real life. He doesn’t seem to have a job making his money entertaining people on the streets eerily similar to one Neal Jones who’s only profession is a job he won’t claim is work, entertaining people as he interviews his celebrity obsessions. Moose portrays a Bobby on the streets, a slang term for a London, England Metropolitan Police Officer. Neal Jones’ only trip outside the continental U.S. was a trip specifically to London, England where he often times acted the exact same as Travolta’s portrayal in the film, only without the costume. For years Neal has had an unlikely friendship with an always darkly dressed former female co-host just like the relationship between Moose and Leah. Most telling of all may be Moose’ use of the non-existent word rememorable which Neal Jones has often ridiculed his other co-host JD Howard for misusing.

“Got lost in Boston, lookin’ for the tea party. Met a child molester in Worcester.” – Fred Durst

Fred Durst has stated that The Fanatic is based on a stalking incident that happened to him but no further details have been given, perhaps because a non-disclosure agreement happened at some point. I find it interesting that Limp Bizkit’s three year run on top was ended so abruptly, possibly to the changes in their front man Durst. It’s telling that the first thing Durst directed was an eharmony commercial filmed on Cape Cod, home of Neal Jones. His first script is a story based on his life with the stalker Moose (John Travolta) being portrayed as a man with an intellectual disability who could never get a woman. Putting words in the mouth of a fictional version of the man who stalked you, that he’s shamed other people for using is a humiliating portrayal to anyone who knows the character is based on them. A creative way to get back at someone who wronged you that’s on a different level of trolling revenge.