Watching Movies - Door in the Woods

Review of "Door in the Woods” by The Headless Critic 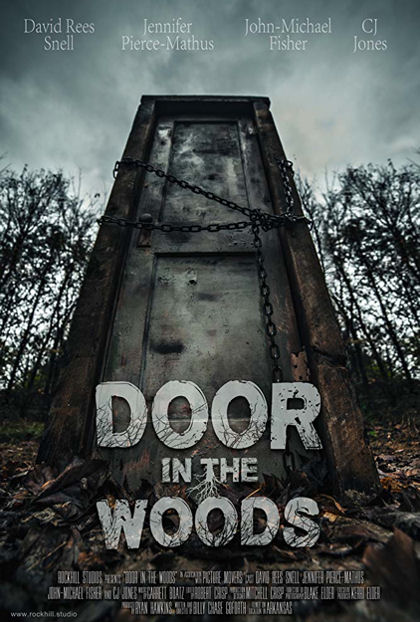 A family hike into nature, a chained door standing by itself in the middle of the woods. For wife and mother Evelyn (Jennifer Pierce Mathus), the retro door in the middle of nowhere is an excellent find that will make a nice addition to their little home. For husband and father Redd (David Rees Snell), he has to lug the large, heavy object out of there. As soon as they get the door home, something isn’t right. On night one, the renovated door sheds all its new paint. The longer they live with it in their home the harder it is to deny something paranormal is attached to it. This abandoned door is a gateway to something far darker.

I love the abstract concept and daunting blunt horror title, Door in the Woods. The idea is there. The cast stands out as unique being cast as a realistic and age appropriate family unit. A realistic wife Evelyn (Jennifer Pierce Mathus), a realistic husband Redd (David Rees Snell), a realistic child Kane (John-Michael Fisher) and an out of the box medium Uriah (CJ Jones) who for once in film history brings a non-stereotypical portrayal to the role. In fact until the film goes horror it’s enthralling, suspenseful, independent filmmaking. I even love the poster for it. Then everything horror gets completely overexposed.

In his first foray into horror filmmaking and only his second feature film, writer and director Billy Chase Goforth does filmmaking all right but horror all wrong. Horror through film is built on suspense and the presence of danger. A problem short horror films have building in a limited time frame but Door in the Woods is a feature length film. A little boy missing isn’t capitalized on by creating a supernatural threat. Ghosts walk through the house as visible as anyone who lives there taking away their sense of mystery with lurking in the shadows being gone. When everything is thrown at your Ouija board séance session nothing comes surprising, seeming more like horror for kids wrapped in an intriguing package for adults.