Review of "Halloween (2007)” by The Headless Critic 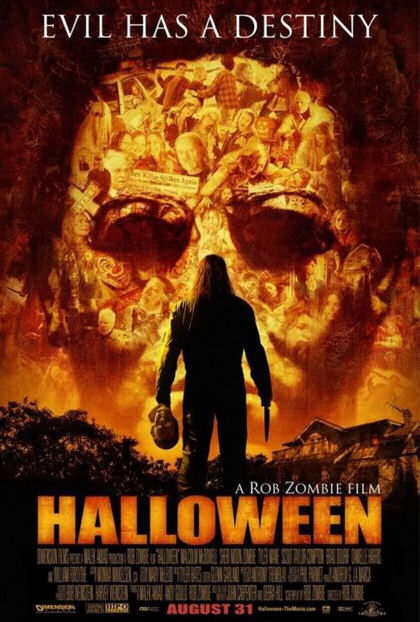 Many years ago on Halloween night in Haddonfield, Illinois three people including teenage Judith Myers (Hanna Hall) were brutally murdered by Judith’s young brother Michael (Daeg Faerch). Michael led a troubled life as a child, living in a broken home, neglected by his mother and bullied at school. For the last fifteen years Michael Myers has been institutionalized under the study of psychiatrist Dr. Loomis (Malcolm McDowell). For fifteen years Michael Myers hasn’t spoken a word. On the eve of Halloween an adult Michael Myers (Tyler Mane) escapes the confines of the institution that’s held him his entire adult life. He's coming for the baby sister he didn't kill that night. Laurie Strode (Scout Taylor-Compton) and her friends Annie (Danielle Harris) and Lynda (Kristina Klebe) are going to have to survive Halloween night while babysitting young Tommy (Skyler Gisondo) on Halloween night, October 31st. “When darkness fell, he arrived” home.

John Carpenter’s 1978 Halloween may be the greatest slasher film of all time. Star Jamie Lee Curtis just may be the best final girl of any horror film, long before “final girl” was a recognizable term. In order to have any good killer, you must have a potential victim the audience can relate to and want to see survive. In 1978 Laurie Strode defined that role. In 2007 in only his third feature film Rob Zombie throws all of that out the window for his interpretation of a Michael Myers film. While I will never see the reason to remake a classic that’s nearly perfect, if you’re going to do it at least Zombie did it his way using familiar actors, a few homage paying scenes and Halloween 4 and 5’s lead Danielle Harris who’s casting is the best part of the film.

Michael Myers goes from normal kid that’s pure evil to troubled child with a reason. Adult Michael goes from unassuming man who’s a murderer to a nearly seven foot monster. The sanitarium that holds the killer hires drunk, redneck, rapists who mistreat everyone and give their patients metal forks to kill people with. Even school bully Wesley (Daryl Sabara) is a one dimensional character. The angelic, virginal Laurie Strode of 1978 that made the perfect final girl is turned into an annoying, perverted teen you wish would die. All of Laurie’s friends and family have nude scenes with the exception of her stripper mother Deborah. How does it make sense that everyone is topless in the film except Zombie’s wife who plays the stripper? Deborah Myers is written into the movie more just so Rob Zombie could get more exposure for his wife Sheri Moon Zombie. Every female in the entire cast is written as a slutty, unbearably annoying character with the exception of Cynthia Strode (Dee Wallace). There is no protagonist you want to see leaving Rob Zombie’s Halloween with the best cast of any Halloween movie in what is the absolute worst remake.