Production by: Protagonist Pictures, Made Up Stories, Snoot Entertainment
Distribution by: Neon, Hulu 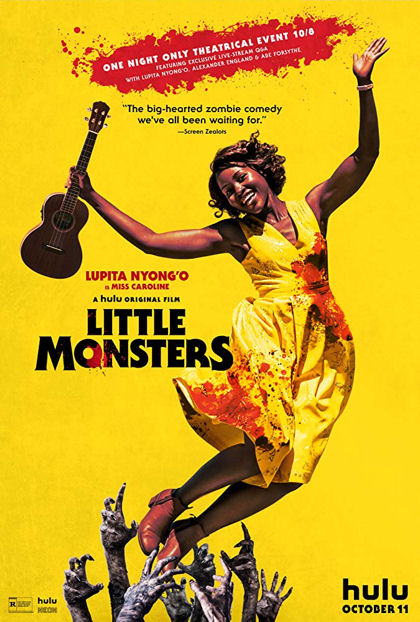 Failed musician Dave (Alexander England) just caught his girlfriend Sara (Nadia Townsend) "stuffing real estate agent dick down her slutty vagina." Sleeping on his sister Tess’s (Kat Stewart) couch, Dave decides to get closer to his nephew Felix (Diesel La Torraca) and help his sister out so he offers to chaperone his nephew's class field trip to the Pleasant Valley Farm to see Felix’s favorite children’s television host Teddy McGiggle (Josh Gad). Really Dave just wants to get closer to his nephew's beautiful teacher Miss Caroline (Lupita Nyong’o). It’s all peanut allergy safe sunshine, glutton free rainbows and sing-alongs until a secret underground government bunker is breached and hoard of zombies rampage all over Pleasant Valley Farm. It’s hard enough surviving against zombies but a teacher, a musician and a children’s television host must protect a class of kids from all the allergies, adult situations, mental well-being and monsters that come along with a pending zombie apocalypse. “Playtime is over.”

The follow-up film for breakout Us star Lupita Nyong’o is a horror comedy with zombies. Nyong’o impresses me even more defending little monsters from monsters in Ned director Abe Forsythe’s third feature than she did fighting herself in Us for Jordan Peele. The cast is comically amazing in this lighthearted horror feature that’s rated R more for their juvenile sense of humor than horror situations. Artfully shot in bright colors, the gore is still great and the comedy even better. Its raunchy teen comedy, meets zombie apocalypse, meets kids television show and it’s amazing. Not suitable for children, Little Monsters is Shaun of the Dead down under in one of my favorite horror comedies of the year.