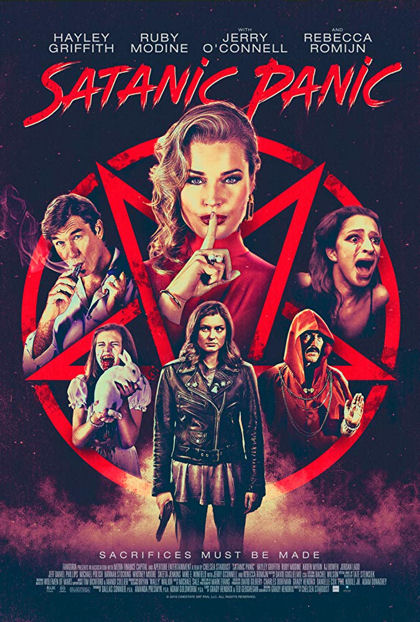 Are you by any chance a virgin? Her first night on the job pizza delivery girl Sam (Hayley Griffith) quickly grows tired of perverted and cheap customers. Her final delivery is a wealthy estate where a bad tips, tips her over the edge. All they had to do is tip the cheap bastards. When Sam decides to get assertive to get the tip she deserves, she lets herself into the wrong house on the wrong night. All she did was ask for a tip but none of those people in there are going to tip her because they’re too busy worshiping Satan. A high society of cheap Satanists inhabits this home and they’re looking for some virgin blood tonight. “Death to the weak. Wealth to the strong.” “Sacrifices must be made.”

All That We Destroy director Chelsea Stardust tackles a comedy horror script from Ted Geoghegan the writer and director of We Are Still Here. Rebecca Romijn, Arden Myrin, Ruby Modine, Jeff Daniel Phillips and Jerry O’Connell co-star in a darkly horrific black comedy that includes scenes of demonic Satanism, ritual rape, graphic nudity and poor tips all done with a comedic note. It is off-putting but entertaining. Hayley Griffith is great as the final girl, well only girl really. It’s Hannah Stocking’s comical smaller part that steals the film for me before she’s sadly impaled by a drill bit kill-do. Sad times in a world of Satanist’s but at least we had a laugh.