Review of "Zombieland” by The Headless Critic 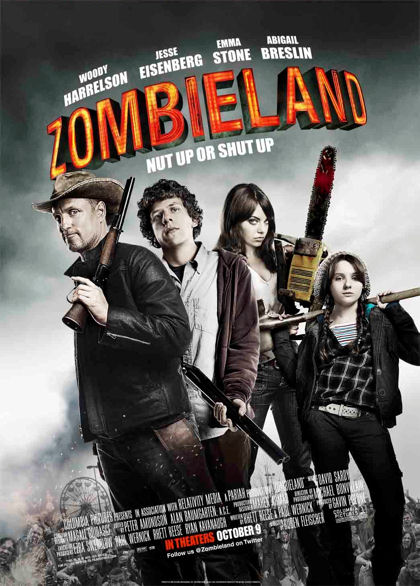 In a post-apocalyptic zombie world, a college student in Texas, we’ll call him Columbus (Jesse Eisenberg) because getting back to his family there is all he ever talks about, has stayed alive setting rules for survival in the new world he calls Zombieland. On his way to finally see his family he comes across a man on his way to Florida who’s the complete opposite. Tallahassee (Woody Harrelson) is a zombie hating, fun loving, zombie killing machine. In Tallahassee, there are no rules or family or friends, there’s only the never ending quest to find the world’s last box of Twinkies which has to be out there somewhere. Believe it or not Twinkies actually do have an expiration date. When the unlikely pair team up temporarily because Tallahassee doesn’t do family or friends, they cross paths with two sisters heading the opposite direction. Wichita (Emma Stone) and her baby sister Little Rock (Abigail Breslin) have been grifting their way through life since they were born. In the new world they find their situation is no different, looking to get what they can in Zombieland and survive. One in search of vengeance and to have a good time while he’s still here. Two are looking to take what they can get, sacrificing everyone else so they can stay together. One will bring them all together in search of family in a post-apocalyptic Zombieland, and possibly find a girl whose hair he can tuck behind her ear.

First time feature director Ruben Fleischer and up and coming writers Rhett Reese and Paul Wernick create an innovative and original zombie horror comedy that immediately reached box office success and gained cult horror film status. Zombieland takes zombies out of their George Romero box and has fun killing them off. Zombieland is the closest film version of the popular Left 4 Dead video game franchise I’ve ever seen with its cast of four survivors, over the top fun kills and the ever lurking threat of a zombie massacre. There’s a natural on screen chemistry between the varying personalities of veteran actor Woody Harrelson, rising stars Jesse Eisenberg and Emma Stone and child actor Abigail Breslin that isn’t easily found on camera. It’s the perfect horror comedy, with the perfect cast that came out at the perfect time to change the zombie game. Even if Rules for Surviving in Zombieland and Kill of the Week aren’t something you want to see in a zombie movie you have to Nut up or Shut up and admit Bill Murray’s role won you over.