Review of "Zombieland 2: Double Tap” by The Headless Critic 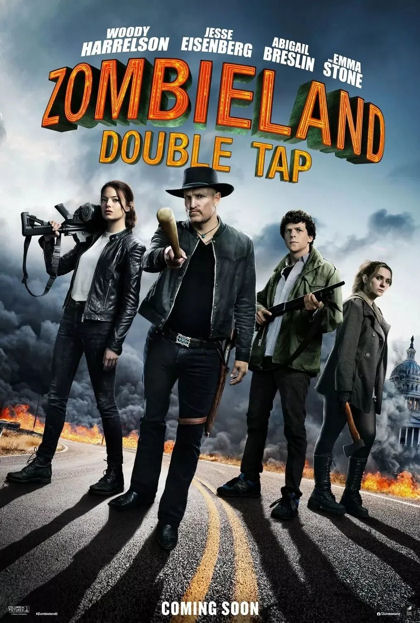 Deep inside the American White House turmoil rages for four survivors who have grown bored living a decade in a post-apocalyptic zombie world. Rule #1 in Zombieland is Cardio. How are you supposed to get your cardio in when you’re locked away completely safe and you hardly ever have to fight or run from anything? Columbus (Jesse Eisenberg), Tallahassee (Woody Harrelson), Wichita (Emma Stone) and Little Rock (Abigail Breslin) are back and they’re bored. When overbearing father figure Tallahassee and lovesick puppy Columbus put the pressure on, sisters Wichita and Little Rock do what they do best and hit the road. For once the world outside the White House is scarier than what’s going on inside it. A new breed of zombie they call the T-800 in memory of Terminator and a new breed of human they call pacifists have evolved in Zombieland. The two worlds are about to meet with the new tenants of the White House stuck right in the middle.

A decade ago first time feature director Ruben Fleischer and up and coming writers Rhett Reese and Paul Wernick created an innovative and original zombie horror comedy that immediately reached box office success and cult horror film status. In the ten years since the first Zombieland the man who once helped make Rob Dyrdek’s Fantasy Factory has gone on to direct box office success Venom, the men who created the highly underrated The Joe Schmo Show went on to write both Deadpool films and new co-writer Dave Callaham who is responsible for The Expendables and the amazing Jean-Claude Van Johnson has also wrote the upcoming Spider-man: Into the Spider-verse 2 and co-wrote Wonder Woman 1984. The original cast and crew behind Zombieland return to double tap the series. They nut up with the second shot landing just as deadly as the first.

In ten years, Abigail Breslin has become a woman, Jesse Eisenberg and Emma Stone look well into their thirties and Woody Harrelson hasn’t aged at all. Don’t worry, our cast of aging city named characters have grown youthful with the additions of Madison (Zoey Deutch) and Berkley (Avan Jogia). From a trailer showing mirror images of our main characters adding name actors like Albuquerque (Luke Wilson) , Flagstaff (Thomas Middleditch) and Nevada (Rosario Dawson) I thought Zombieland 2 would be just another money grab sequel without half the value of the original. With everyone behind the first film returning, actors and creative minds alike, I was pleasantly surprised. Double Tap may not be the innovative original in search of their Twinkie but more of the same is a welcomed addition to the newfound series. Just as comical and entertaining as the original film, Zombieland 2 grows up with nice evolutions like the T-800, while staying juvenile with their dick kicks.