Review of "Red Letter Day” by The Headless Critic 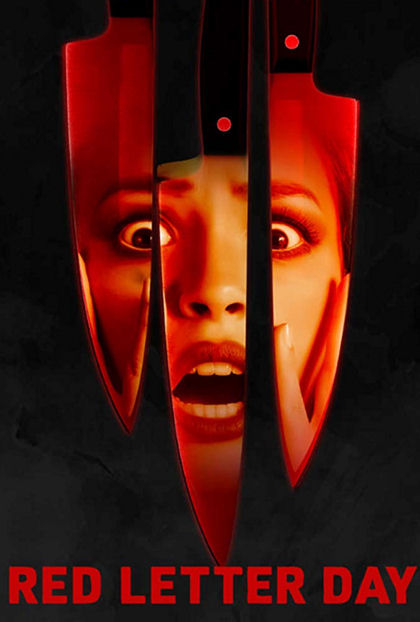 It's time for the first Red Letter Day. Some have taken it seriously, others have not. Some are on their guard, some haven't even checked their mail today. Whether you find it a humorous prank or you're scared for your life, it's Red Letter Day. "Kill Thy Neighbor" before they kill you!

Before they even had a chance to have their mail forwarded to their new home each member of the Edwards family receive a red letter in the mail. They’re not the only ones. How much do you trust the world outside the comfort of your manicured reality? The instructions found inside the red letter are as follows… You’ve been matched with someone with conflicting beliefs to yours within five kilometers of your residence. They have been sent the same letter with your image and address and you’ve been sent theirs. You’ve both been instructed to kill the other before they kill you. Good luck and Happy Red Letter Day!

When single mom Melanie Edwards (Dawn Van de Schoot) receives a letter instructing her to kill her friendly neighbor and her teenage son Timothy (Kaeleb Zain Gartner) receives the same letter instructing him to kill the neighbor who’s always walking his dog, Melanie approaches what must be a prank with a sense of logic while her son takes the defensive and her teen daughter Madison (Hailey Foss) won’t even open her letter. Melanie goes to the house of the neighbor she's supposed to kill Alice Huang (Arielle Rombough) and her paranoid husband Lewis (Michael Tan) to make peace in this troubled time. At home her kids realize prank or not, Red Letter Day has gone viral and a least one person is dead in their town alone.

It’s kill or be killed on Red Letter Day. In his first feature film Canadian director Cameron Macgowan creates his own world of a more realistic Purge where a troll pits neighbor against neighbor leading to neighborhood homicide. Red Letter Day is an original concept that I enjoy very much. There’s blood and murder and everything is done practical which is appreciated. I enjoy the family’s realistic approach to this new killing day and that the film doesn’t go completely irrational but still has horror. The social media aspect included in the movie is done excellent as most films are either social-media horror or completely ignore how social media would affect what’s otherwise happening.

A brilliant concept for me fails on execution being more Hallmark than horror movie. It’s painfully slow and dialogue is delivered cringeworthy. With dialogue being the majority of the film it’s hard to overlook. Acting is steady throughout the film so it probably isn’t the actors at fault. I've never enjoyed Hallmark movies but maybe those who do will enjoy this Hallmark Horror better than me.