Review of "Lighthouse” by The Headless Critic

Production by: A24, New Regency Pictures, RT Features
Distribution by: A24 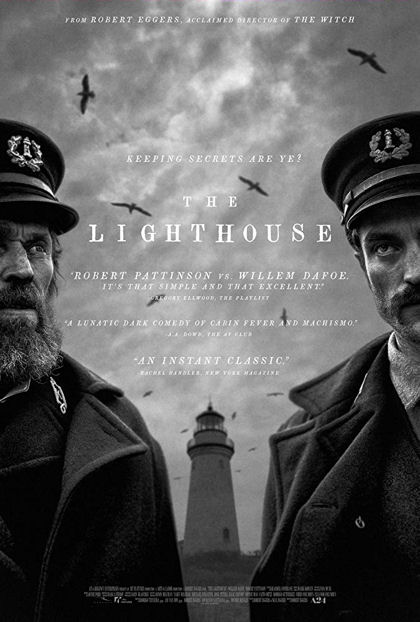 From the moment they stepped off the boat he knew that something wasn’t right. They’re the keepers of the light, stationed at a remote island lighthouse, the last stop between ships at sea and crashing ashore. Salty weathered sea captain Thomas Wake (William Dafoe) has taken up yet another six week watch on the isolated island for two. Timberman Ephraim Winslow (Robert Pattinson) is on the run from the tree tops he knows, looking to make a living at something different. A couple of wickies stationed alone for six weeks, Thomas keeps the light as Ephraim does the grunt work. Why won’t Thomas let Ephraim see the light though? What’s he keeping there? “There is enchantment in the light.”

The follow up film to the acclaimed arthouse horror movie The Witch from Robert Eggers is a 19th century tale with predominately two actors that is as arthouse as cinema gets. Filmed in black and white with the nearly square 1.19:1 aspect ratio that’s intended to represent photographs of the time period, Eggers creates another film intended to be a piece of art. It is and will always remain my firm belief while cinematography and artistic expression can enrich movies, films will always be predominately made or broken by their story.

Director Robert Eggers first feature The Witch was a brutal dose of seventeenth century reality that devolves its ending into elevating teenage witches. The end of the nineteenth century based Lighthouse devolves its reality far sooner. The almost strictly two person cast of William Dafoe and Robert Pattinson give excellent portrayals of characters that simply aren’t attached to any kind of reality. The roles of Thomas Wake and Ephraim Winslow are what I like to call actor’s roles, meaning actors love to take such roles to exercise their eccentricities but audiences cannot largely connect to the characters because they’re not based in any kind of reality.

The black and white filming loses the vibrant colors and bitter darkness Eggers found in The Witch. The 1.19:1 aspect ratio the film is shown in is simply annoying and has no place in 2019. Cinema is art because it can be beautiful or dark or anything the artist wants while telling a well written story. The Lighthouse is fart jokes, masturbation and mermaids. Not even William Dafoe’s fantastic performance can save a film that doesn’t have a good story, doesn’t utilize cinematography or sound in any useful way. Robert Eggers once again gets lost in the delusion that filmmaking is art without seeing the art in filmmaking.