Peter Strickland established himself as the reigning auteur of thematically driven film with the lighting-in-a-bottle poignancy of Duke of Burgundy. If Duke is the consummate artistic manifestation of the navigational complexities of relationships, In Fabric is “only” an exceptional film about fate and beauty and the wisps of fetishism that circle the point at which they meet. 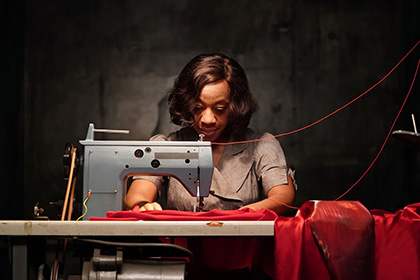 Strickland always creates the surreal, airy quality of 1970s European genre art, whether it be giallo or sexploitation, and to modernize the themes and technical work without losing the abstract elements that were prevalent in the films of Argento, Rollin, Franco, Lado, and Martino. Most importantly, Strickland’s films never feel like homage.

The only giveaway that they are not drawn directly from some obscure archives is the exquisite cinematography that surprasses the technical qualities of the earlier era. Ari Wegner’s contributions to the complex visual language of the film’s “artery-red” dress should be noted. The use of mirrors, shadow, color, and unsettling blocking, including unusual, but clearly deliberate and effective choices for structuring conversations really set the film many tiers above other era-inspired fare.

The unusual photography really helps sell the unusual subject matter. The film stresses repeatedly that it is not telling the stories of the characters we see inhabit the world of the dress, for they are the fodder of the ever-flowing, ever-moving garment. This does create a surprising and uncomfortable shift in the final act, but the risky move pays off and reinforces the thematic focus. This is especially challenging because Marianne Jean-Baptiste’s Sheila does everything possible to hold our interest and care in an absurd world of mysterious, tongue-in-cheek secondary entities - some human, some maybe not exactly.

Casting Jean-Baptiste as Sheila was a brilliant choice, forcing art-film enthusiasts to consider the present film’s black-and-white contrast with her breakout work in the character-focused Secrets and Lies. Our emotional attachment to Sheila creates just the right frustration at just the right rug-pull moment to resign us to the reality that the top billing goes to the dress.

In Fabric is the sort of movie that’s absolutely striking and unforgettable, but unrelentingly patient, burdening those who attempt to describe it in standard terms with the feeling that a murderous garment may be hovering just behind them. While Strickland’s characters can never shake the titular evil’s hiding place, the demon-dress with the wit of Ambrose Bierce and the stuffy, formal, rigid earnestness of Sigmund Freud presses on, leaving a simultaneously hilarious and devastating path of sorrow and destruction.

I could not recommend it more.

In theaters December 6 and on demand December 10.